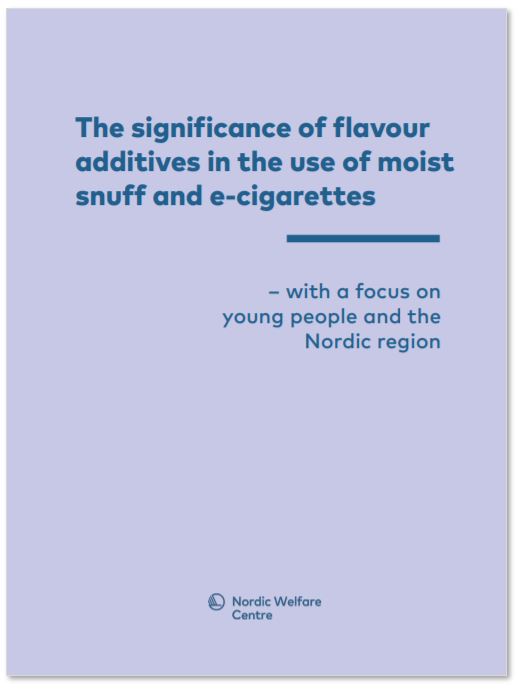 Many researchers are focusing on the role played by e-cigarette flavourings in encouraging young non-smokers to use these products.

Their report – The significance of flavour additives in the use of moist snuff and e-cigarettes – with a focus on young people and the Nordic region – provides a readable summary of the evidence as well as a summary of e-cigarette and oral tobacco (snus) use in those countries.

Their conclusions are pasted below, with links to the research on which they based their findings. Because this report is already 11 months old, further studies are also identified at the end of this blog post.

CONCLUSIONS OF THE NORDIC WELFARE COUNCIL:

Bold, 2016: Reasons for Trying E-cigarettes and Risk of Continued Use
Several reasons for first trying e-cigarettes predicted continued e-cigarette use, including good flavors, does not smell bad, can hide from adults, low cost, friends use, can use anywhere, to quit smoking regular cigarettes, and because they are healthier than cigarettes.
Longitudinal surveys. Middle and high school students (n=340)

Cooper, 2016: Flavorings and Perceived Harm and Addictiveness of E-cigarettes among Youth.
Ever and current e-cigarette users had higher odds of reporting that flavored ecigarettes were “less harmful” than nonflavored e-cigarettes, compared to youth who did not use e-cigarettes.
Data from a rapid response surveillance system. Students (sample [n]=3,704 from a population of students [N]=434,601; grade 6, 8, and 10)

Dai, 2016: Flavored Electronic Cigarette Use and Smoking Among Youth.
Use of flavored e-cigarettes was associated with higher odds of intention to initiate cigarette use, lower odds of intention to quit tobacco use, and a lower prevalence of perception of tobacco’s danger.
2014 National Youth Tobacco Survey (NYTS). Middle and high school students (n=21,491).

Evans-Polce, 2018: Reasons for Vaping Among U.S. 12th Graders.
Three distinct classes of vapers were identified: adolescents who were Vaping for Taste + Entertainment, Vaping to Experiment, and Vaping to Replace Cigarettes.
2015 and 2016 Monitoring the Future study. Students, 12th graders.

Harrell, 2017: Flavored Tobacco Product Use among Youth and Young Adults: What if Flavors Didn’t Exist?
Most of the youth and young adult tobacco users reported using flavored tobacco. Three-fourths of flavored product users said they would no longer use the product if it was not flavored. This was highest for e-cigarettes and hookah and lowest for cigarettes.
Texas Adolescent Tobacco and Marketing Surveillance System (TATAMS). Youth (n=2,483) and Marketing and Promotions across Colleges in Texas (MPACT). Young adults (n=4,326)

ModestoLowe, 2017: E-cigs . . . Are They Cool? Talking to Teens About E-Cigarettes.
Electronic cigarettes have gained wide acceptance among adolescents, especially those with sweet flavors such as bubble gum and cheesecake. This article outlines the basics of e-cigarettes and potential health hazards.
Motivational interviewing

Patrick, 2016: Self-reported reasons for vaping among 8th, 10th, and 12th graders in the US: Nationally-representative results.
Overall, results suggest that decisions to vape are based on curiosity, taste, and pleasure, rather than for reasons such as quitting regular cigarettes or substituting for regular cigarette smoking.
2015 Monitoring the Future study. Students (n=4,066; grade 8, 10, and 12)

Schiffman, 2015: The Impact of Flavor Descriptors on Nonsmoking Teens’ and Adult Smokers’ Interest in Electronic Cigarettes.
The e-cigarette flavors tested appealed more to adult smokers than to nonsmoking teens, but interest in flavors was low for both groups. Online survey. Non-smoking teens and adult smokers (n=648; age 13-80)

Shang, 2018: The impact of flavour, device type and warning messages on youth preferences for electronic nicotine delivery systems: evidence from an online discrete choice experiment. Fruit/sweets/beverage flavours significantly increase the probability of choosing ENDS among youth and flavour has the most pronounced impact among three attributes.
Online survey.

Tsai, 2016: Reasons for Electronic Cigarette Use Among Middle and High School Students – National Youth Tobacco Survey, United States, 2016.
Among students who reported ever using e-cigarettes, the most commonly selected reasons for use were use by “friend or family member”, availability of “flavors such as mint, candy, fruit, or chocolate”; and the belief that “they are less harmful than other forms of tobacco such as cigarettes”. Availability of flavors as a reason for use was more commonly selected by high school users than by middle school users.
2016 National Youth Tobacco Survey (NYTS). Student U.S. middle school (grades 6-8) and high school (grades 9-12).

Villanti, 2017: Flavored Tobacco Product Use in Youth and Adults: Findings From the First Wave of the PATH Study (2013-2014).
Flavor was a primary reason for using a given tobacco product, particularly among youth. Eighty-one percent of youth and 86% of young adult ever tobacco users reported that their first product was flavored versus 54% of adults aged ≥25 years.
2013-2014 Population Assessment of Tobacco and Health study (PATH) Adults and youth (n=45,971; age >12)

Goldenson 2019: A Review of the Use and Appeal of Flavored Electronic Cigarettes
Nontraditional-flavored e-cigarettes are popular among youth, but may be less common among older adults and combustible cigarette smokers. Further research is needed to determine whether use of e-cigarettes in nontraditional flavors affects smoking cessation.
Review study

Soneji, 2019: Use of Flavored E-Cigarettes Among Adolescents, Young Adults, and Older Adults: Findings From the Population Assessment for Tobacco and Health Study
The leading e-cigarette flavor types among adolescents were fruit, candy, and other flavors; among young adults were fruit, candy, and mint/menthol; and among older adults were tobacco or other flavors, fruit, and mint/menthol.
Path Study 2014-2015 (n=3086)