In Europe in 2017 3,354 breast cancer deaths could have been avoided if women had not smoked nor been exposed to passive smoking, according to May, 2020 report that tallied these death tolls for all 28 countries of the European Union.

As time passes, the evidence accumulates for considering that active tobacco smoking is associated with a modest, but real increase in the risk of breast cancer. The consistency of findings, the low heterogeneity of results of prospective studies, the dose–response found in prospective studies, the permanent higher risk since the first studies done on the topic, and the absence of influence of major confounders on associations are all indicating that the relationship would be causal. For passive smoking also, the evidence for a modest but real association with breast cancer strengthens with the accumulation of data. In this respect, public health policies should inform women about the risk of breast cancer associated with both active and passive smoking.

A recent court decision in Quebec has clearly established that tobacco manufacturers have a duty to warn of dangers from using their product and that, according to Quebec law, they cannot omit telling consumers important facts.  That 2 to 6 percent of breast cancer is attributable to active and passive smoking would qualify as an important fact that tobacco companies omit telling consumers.

As shown below (with more illustrations at the end of this post, some governments already require warnings about breast cancer on cigarette packages. Canada is not yet among them. 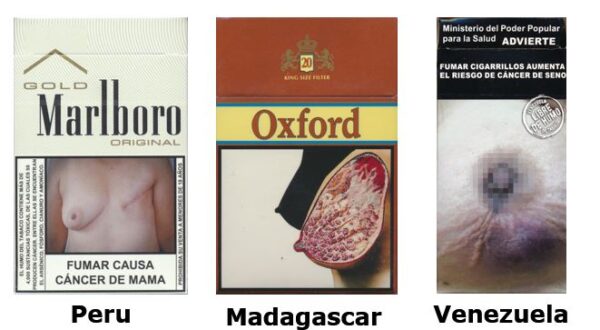 Over the decades, Health Canada has gradually broadened the scope of health impacts that are communicated through health warning labels on tobacco packaging. Given the evidence reviewed here, one might expect breast cancer to be included in a future revision of regulated health warning labels.

Whatever governments might do or not do about this issue does not negate the tobacco industry’s duty to warn.  This is made explicit in Section 16 of the Tobacco and Vaping Products Act:

For greater certainty, this Part does not affect any obligation of a manufacturer or retailer at law or under an Act of Parliament or of the legislature of a province to warn consumers of the health hazards and health effects arising from the use of tobacco products or vaping products and from their emissions.

Tobacco companies should be warning women about the risks of breast cancer from active and passive smoking and they should be doing it now.