(Ottawa and Montreal) – A poll conducted for Physicians for a Smoke-Free Canada and the Quebec Tobacco Control Coalition shows key elements of Health Canada’s approach to reducing smoking are out of line with public opinion.

“A few years ago the federal government shifted its focus away from regulating tobacco products and towards a vaping market where smokers were encouraged to switch to vaping products but young people were to be discouraged from both smoking and vaping,” explained Cynthia Callard, executive director of Physicians for a Smoke-Free Canada. “The results from this poll show that Canadians want government to not only roll back the vaping market but to beef up controls on tobacco products.”

The poll was conducted by Leger between September 29th and October 11th, 2021 among a sample of 2,400 Canadians aged 18 and over. Survey participants were asked about their perspectives on tobacco harm reduction policies. They were also asked to choose from a list of tobacco control measures which they thought would be most and least effective at reducing smoking.

When asked their views on harm reduction approaches, the majority of Canadians surveyed (79%) – including a majority of smokers (75%) – did not support Health Canada policies that are aimed at making e-cigarettes attractive to and widely available for smokers.

The strongest support (79%) was for governments to not focus on getting smokers to switch to vaping products, but to focus instead on helping smokers quit smoking and nicotine use altogether. A clear majority (69%) felt that vaping products should not be sold in attractive flavours even if this resulted in smokers only having access to flavourless or tobacco-flavoured products. In fact, close to a third of adult vapers (29%) favours allowing only tobacco and flavourless e-liquids in order to protect youth. Additionally, a small majority of Canadians (55%) would favour vaping products being removed from convenience stores and vape shops and sold only in pharmacies or smoking cessation clinics.

“The consensus is that Canadians want to reduce the presence of products with nicotine, especially to avoid new young users,” concluded Leger.

Survey respondents were also asked to choose the most and least effective policies from a set of five new regulatory approaches to tobacco products. The policies Canadians thought would have the greatest impact were requiring tobacco companies to make cigarettes less addictive by reducing the amount of nicotine in them and banning the sale of tobacco and nicotine products except in specialty shops where young people may not enter. Interestingly, the policy of raising the minimum legal age to buy tobacco to 21 years was overwhelmingly considered to be least effective of the options offered.

“The measures presented in this survey are among those proposed to governments five years ago when the Canadian tobacco control community met to develop an “Endgame” approach to reducing tobacco use in Canada,” explained Flory Doucas, co-director and spokesperson for the Quebec Tobacco Control Coalition.

“Although all of these suggestions were excluded from the 2018 revision to Health Canada’s tobacco strategy, this poll suggests that the public understands that greater controls on the tobacco industry are needed if smoking rates are to fall. These results should motivate governments and the health community to work for a tighter framework governing which tobacco and nicotine products are allowed for sale as well as where they can be sold.”

Last June, Health Canada tabled draft regulations to restrict flavourings in vaping products, while allowing menthol and mint flavours to be sold even though these are very popular flavours with young Canadians. “The results of this poll should prompt federal and provincial health ministries to ensure a comprehensive ban on all flavours other than tobacco, similar to those already in place in Nova Scotia, Prince Edward Island and New Brunswick,” said Ms. Doucas.

Tobacco use remains the leading preventable cause of death in Canada. In 2019, one in five Canadian deaths (18%, or 51,700 deaths) were a result of using tobacco industry products. 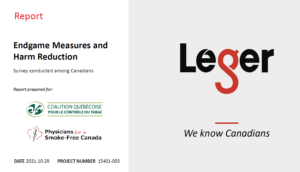