On May 5, Statistics Canada released results of the third wave of the Canadian Tobacco and Nicotine Survey., in which almost 10,000 Canadians reported their use of tobacco and vaping products. (Top-level results of prior waves, with smaller samples, are available on Health Canada’s web-site, and other analysis was reported here earlier).

This blog presents graphs showing the results of this survey in the context of previous versions of Health Canada’s tobacco use surveys. 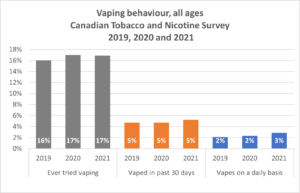 Statistics Canada reported very little overall change in vaping behaviour among Canadians as a whole, with mostly unchanged proportions of Canadians who had ever tried a vaping device, who were using one in the past month or who were using one daily. The one significant change they highlighted was the growing proportion of current vapers who were using daily — up from 44% to 55% between 2020 and 2021.

No change in teen-vaping, but an increase in vaping among young adults.

The good news is that the increase in youth vaping observed after the market was legally opened 4 years ago has stalled. Over the past 2 years, this survey has not observed a statistically significant increase in vaping among teenagers or adults over 25

Vaping rates among young adults, however, have increased. Many of those who were in this age group this year would have surveyed as a teenagers when this survey began. Whether these are the same young people who would have been teenagers in previous surveys or whether they are Canadians who start to vape as young adults will not be known until the survey’s full data set is released and analyzed. 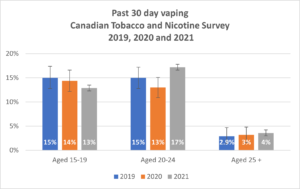 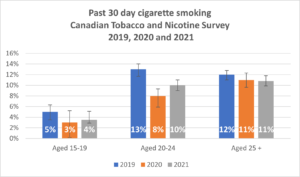 No decrease in smoking for any age group.

The CTNS did not observe a reduction (or increase) in cigarette smoking overall, nor for any age group.

The introduction of e-cigarettes in 2018 complicated the picture of Canada’s progress against tobacco use. The age group which has most reduced smoking (adults over 25) is the group with the least use of e-cigarettes. For younger age groups, overall nicotine use has returned to levels higher than they were in 2018. 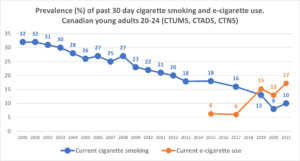 Sources for data above: