In recent months vaping companies have been warning that regulations aimed at reducing vaping will “drive people to cigarettes.”

The recent “facts not fear” campaign run by Imperial Tobacco Canada, for example, predicts that regulations to protect young people from pro-vaping advertising will be “forcing consumers to go back to cigarettes.”

Even some public health authorities – like Public Health England – expressed concerns that news reports about EVALI would turn nicotine users back to the cigarette market and that more would “die as a result”.

Were these fears well founded?

More data is available to help answer that question. From the corporate reports on the U.S. market, it would appear that people are indeed buying fewer vaping products, but are not buying more cigarettes as a result. Cigarette volumes in other countries do not appear to have been affected.

Vaping sales are down. 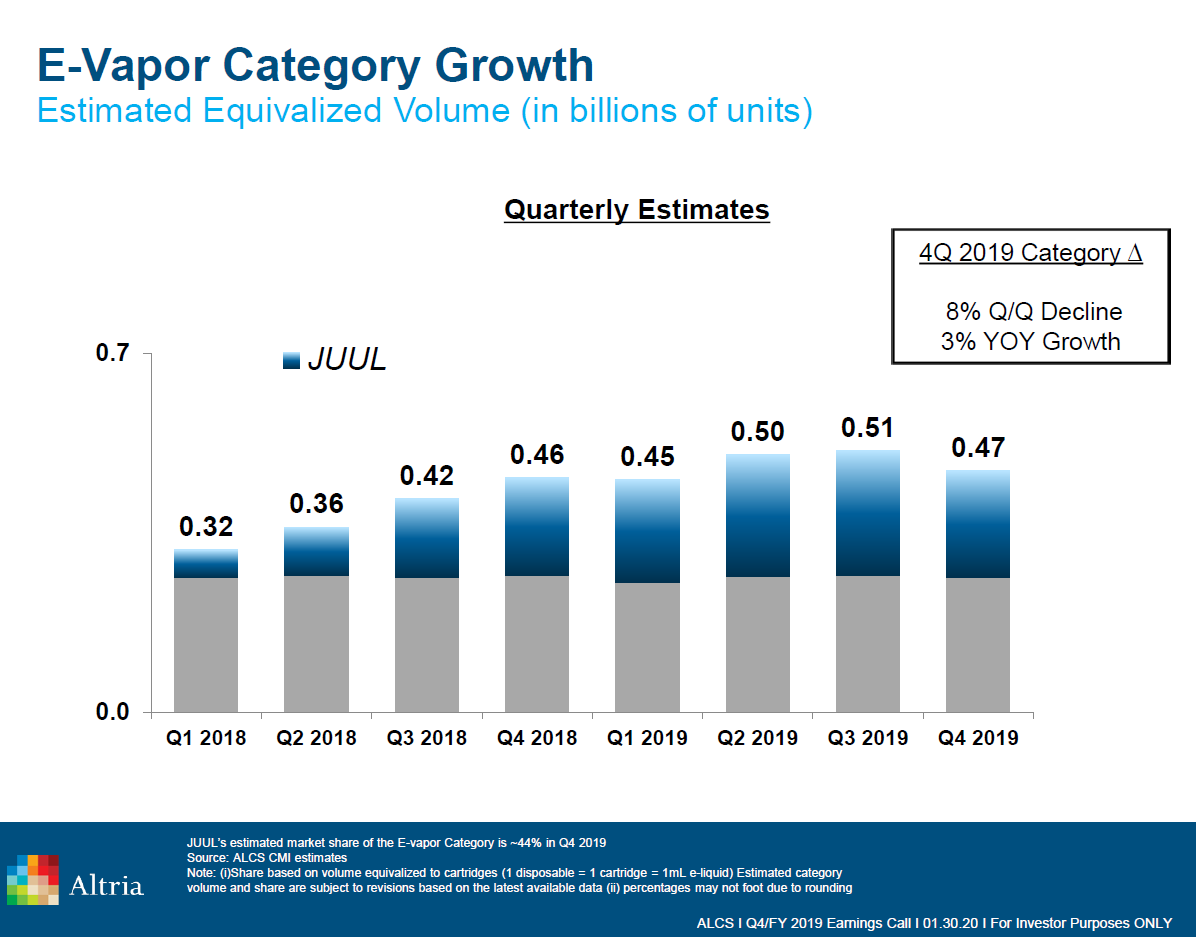 Over the last weeks, two of the major stakeholders in vaping products have reported to shareholders that the vaping market has shrunk in the United States and also in other countries.

Last week, Altria told investment analysts that in the last three months of the year, overall sales of electronic nicotine products in the USA had fallen by 8%. Most of the decline in the U.S. market was experienced by JUUL, of which Altria is a one-third owner. (Altria does not sell cigarettes outside of the United States.)

This week, Imperial Brands told investors that declining sales (“weaker than expected consumer demand for vapour”) were causing it to predict a 10% drop in earnings. Imperial Brands sells BLU e-cigarettes across Europe and North America through its subsidiary Fontem Ventures.

These official statements to investors confirm estimates by commercial market analysts that vaping sales had dropped following warnings by the US Centers for Disease Control last fall.

Tobacco sales are not up. They too are down.

Altria’s other caution to investors last week was that in the USA tobacco sales were also declining at a faster rate than in previous years – a reduction of 5.5% over 2019, with the decline in the last three months similar to that in previous years. 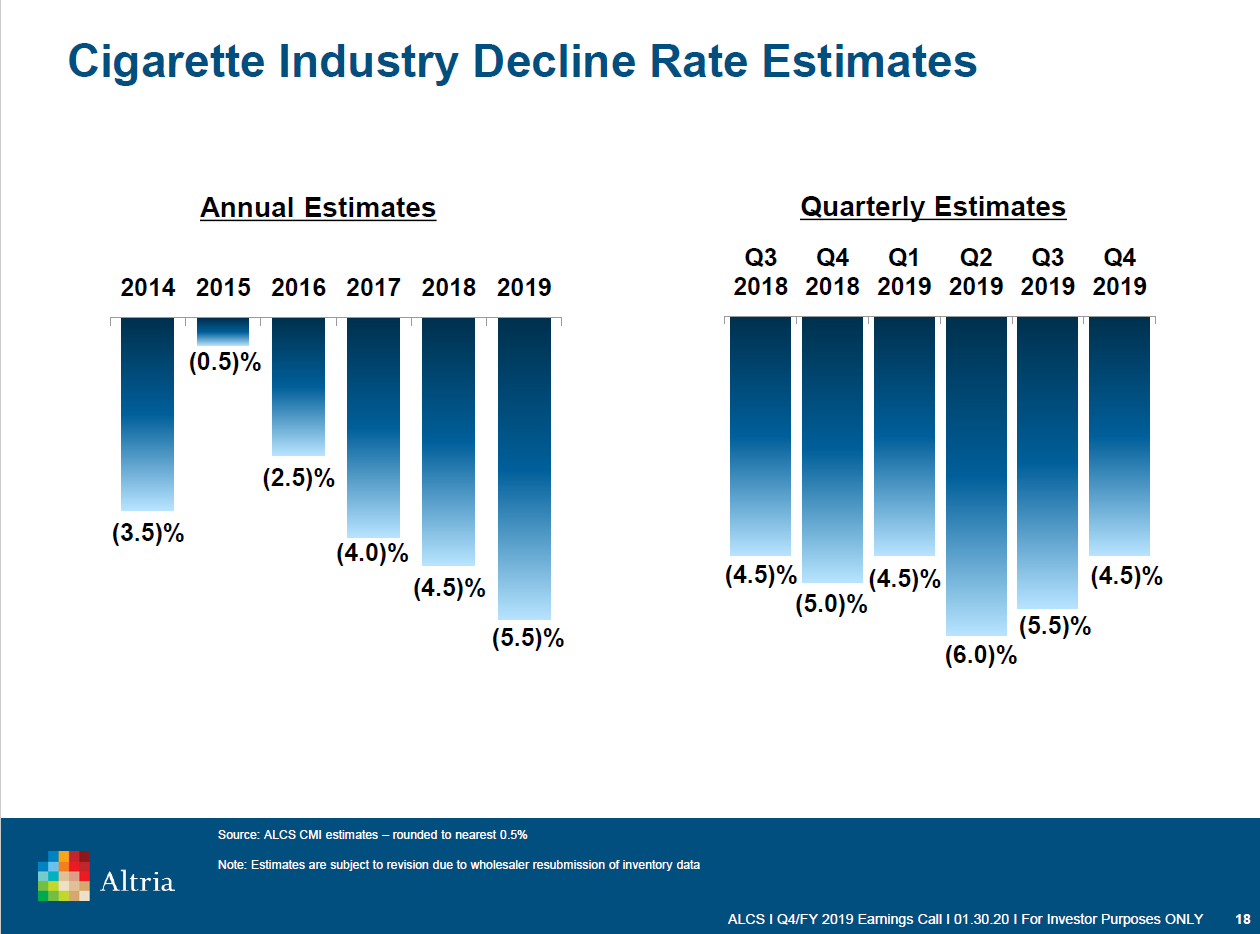 Imperial Brands also reported last fall that other categories of nicotine products (oral snus, e-cigarettes, cigars, etc) were responsible for about one-quarter of the fall in cigarette use (1.3% of 5.6% fall in cigarette sales). When asked whether restrictions on e-cigarette flavours were driving up cigarette sales, their US director said probably not. (“We still think that our assumption of an FMC market decline of between 5% and 6%, probably slightly closer to 6% than 5%, still remains correct.)

This week two more of the four large international tobacco companies updated investors on their sales over 2019 – including the fall period after concerns about vaping products were widely reported.

On February 6, Philip Morris International (which does not sell cigarettes in the United States) reported that the total cigarette market in the European Region “decreased by 0.6%” in the fourth quarter – a greater decrease than the annual fall of 0.4%.

A day earlier, Japan Tobacco International reported that industry-wide cigarette sales were down overall, and made particular reference to their decline in France, Germany and the United Kingdom. (Industry sales increased in the last half of the year in Japan, where vaping products are not permitted, but where heat-not-burn cigarettes have one-quarter of the market share.) JTI’s 154 page report on 2019 earnings curiously made little reference to the sales of their Logic Compact vaping device, which is available for sale in 25 countries.

The last of the tobacco multinationals, British American Tobacco, will make its sales data public on February 27. The company has previously said that reductions in the vaping market were not affecting cigarette sales. Last November, when discussing its sales over the summer and early fall, analysts asked management if cigarette sales would be effected. BAT’s Chief Financial Officer Tadeu Marroco was quoted as saying: “we are not anticipating a significant fall back to cigarettes”.

These corporate reports confirm the opinion of market analysts, like Bloomberg that “smokers haven’t gone back to cigarettes.”

The fact that cigarette sales are falling does not necessarily mean that vapers are not switching back to combustible forms of tobacco use. It could be that cigarette sales would have fallen faster in the fourth quarter had there not been additional regulatory controls and more discourageme The population-level impact, including overall cigarette consumption, will reflect these many shifting smoking patterns. The helpful illustration shown below of the messy paths of consumer use of nicotine was provided by British American Tobacco.

In this context, what is particularly relevant to the question of whether vapers would return to cigarettes if people became more concerned about the risks of vaping is whether the companies did better than they expected after this years’ events, or whether they have changed their predictions of cigarette sales as a result.