A key challenge for health regulators when facing emerging nicotine devices is the complexity and change in that market place.

Unlike cigarettes, which researchers and regulators have generally treated as identical products across geography and time, next generation products like e-cigarettes vary greatly in their design, contents  and marketing from place to another and from one month to the next.

These differences can hinder the ability to apply research evidence or regulatory evaluations from one jurisdiction when developing approaches for another. 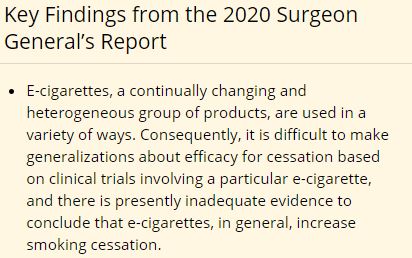 This “heterogeneity” of the e-cigarette market was identified by the U.S. Surgeon General in his recent report on Smoking Cessation as a key reason for not beng able to settle the question of whether e-cigarettes are effective smoking cessation aids.

“E-cigarettes, a continually changing and heterogeneous group of products, are used in a variety of ways. Consequently, it is difficult to make generalizations about efficacy for cessation based on clinical trials involving a particular e-cigarette, and there is presently inadequate evidence to conclude that e-cigarettes, in general, increase smoking cessation.”

The influential 2018 report by the National Academies of Science, Engineering and Medicine similarly stressed the “highly variable” “product characteristics” that affected conclusions about the impact of e-cigarettes on health.

Even products sold by individual companies under the same brand-name can vary greatly from one country to the next.

We gathered information from the country-level web-sites for e-cigarettes that are managed by the four largest multinational tobacco company systems: JUUL (Altria-Philip Morris International), VYPE (British American Tobacco), BLU (Imperial Brands) and LOGIC (Japan Tobacco). This is made relatively easy because each of these companies sell seemingly identical products on nearly-identical web-sites in a dozen or so countries.

Comparing the e-cigarettes that are offered for sale in different countries does not give very good information on what people are actually putting in their lungs, but it does give some insight into the products that companies think they can manufacture within the local regulations and also find a buyer for.

The differences among products may reflect regulatory conditions (i.e. differing maximum nicotine concentrations), but could also reflect differing consumer preferences (i.e. different types of flavours), differences in competitiveness of the marketplace (i.e. higher or lower prices). They could also reflect differences in the companies’ market strategies – it is possible that the companies are testing different marketing approaches in different markets.

Without inferring meaning from these different country-level marketing practices, we can nonetheless observe them. During January 2020, data on the price, nicotine level and flavour offerings for each e-cigarette device was obtained and documented for each company web-site that was accessible. The results were tabulated in data sheets, which can be accessed through the links at the bottom of this post.

BAT and Japan Tobacco sell their leading e-cigarette devices at lower prices in Canada than they do elsewhere. A starter kit for VYPE e-Pen3 and Logic Compact can be purchased this month for less than $10 in Canada, but the listed or suggested retail price in other countries is higher – twice as much in Europe and three times as much in New Zealand. The difference in affordability, shown by using purchasing power parity, can be even more pronounced.

For JUUL and myBLU, different global pricing practices were noted. In both those cases, the prices in the United States were least expensive, but were otherwise more stable across all markets.

Canadians are not offered the option of lower-nicotine strengths.

Although many countries impose maximum nicotine concentrations (the level in the European Union is 20 mg/ml), none impose minimum nicotine concentrations. Nonetheless, the availability of low nicotine liquids is much higher in some markets than in other. In many of the European countries, there are many flavour options for nicotine-free and lower-nicotine (9 mg/ml) cartridges, but in Canada consumers generally only have the option of 18 mg or above. Similarly, European consumers have more options for non-protonated nicotine (those which do not use salts) than they do for the more easy-to-inhale protonated (salted) versions, which are predominant in Canada, the United States and New Zealand.

JTI, for example, does not offer customers outside of the European Union with an option for its Logic Compact which is less than almost double the European maximum concentration. (34 mg vs 18 mg).

Some markets – and some companies – offer more flavour options than others

The role of flavours in inducing young people to take up vaping (or encourage smokers to switch to vaping) is currently a much discussed aspect of vaping regulation. The question of “how many flavours is enough?” seems to be get different answers in different markets.

In all markets, tobacco, mint and fruit flavours predominate, but the number of flavours offered varies considerably by company and country. JUUL, for example, sells only a handful of flavours in each country. (Ahead of regulatory requirements, it withdrew non-tobacco or menthol flavours from the U.S. market and has suggested it will do so in Canada as well.) 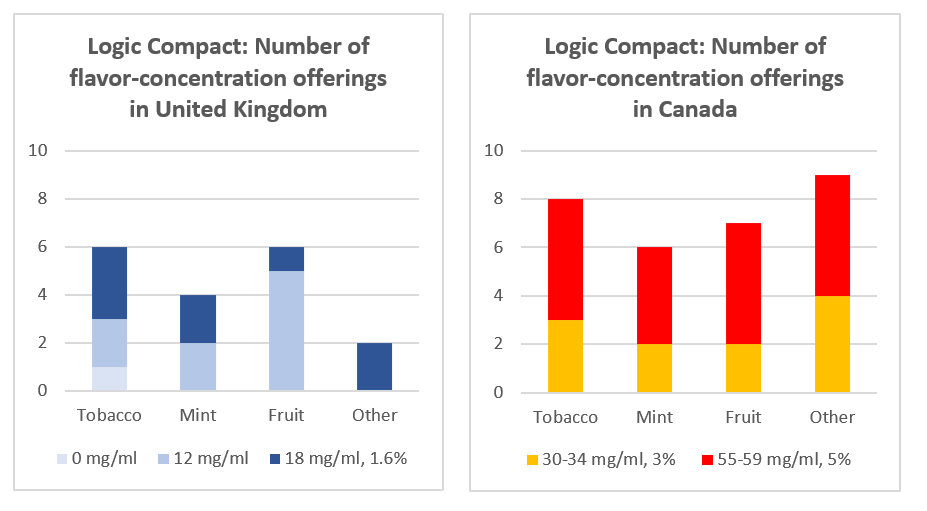 The Vype product, by contrast, is sold with many more flavour options for its cartridge-based systems (ePen 3 and ePod), especially in larger European markets like the United Kingdom and France.

The relationship of flavours to nicotine strength also varies. There are relatively more higher- nicotine level offerings for tobacco-flavoured Logic cartridges in Europe than there are for fruit flavours — although in Canada, all the flavours are offered in much higher nicotine concentrations.

Small data is not enough.

Scraping the data from web-sites may provide some insight into differences in the e-device market across countries, but is a cumbersome, limited and inadequate method to provide real anlaysis. It cannot substitute for methods to systematically track the products offered for sale and the use of these products.

Public market data systems have not been developed. To date only the (expensive and licence-restricted) commercial services provided by trade analysts like Euromonitor, Numerator and Nielsen are available to regulators and researchers. The federal Tobacco and Vaping Products Act gives the federal government the right to require companies to provide reports on sales and marketing activities, but these are not yet in place. (Such regulations have been required of tobacco manufacturers for almost 20 years). No government has yet required retailers to use “sales recording modules”, such as those required for restaurants and food trucks in Quebec, although this is a method used by Nielsen to gather commercial data.

Public health surveys, like the Canadian Community Health Survey, are designed to monitor cigarette smoking, but do little to enlighten regulators aboaut the impact of the new nicotine market on health.

It is becoming clearer, as the U.S. Surgeon General pointed out last week, that with “heterogeneity” and “continually changing” markets, we will be challenged in finding evidence we can rely on to support regulatory changes. Even the conclusions of major scientific reviews, like those of the National Academic of Science, Engineering and Medicine, can be called into question. That report considered only research published before August 2017: many of those studies would have been based on products on the market in 2016 or earlier.

Links to fact sheets with data cited in this post: