[NB: On December 4th, VITA issued a statement objecting to and correcting some of the information provided in this blog. The original blog appears below, but is now annotated with reference to their objections and corrections.]

Last week the first webinar was held between the Vaping Industry Trade Association (VITA) and its membership. Unexpectedly, one of the participants made the slides and other information available to us. With this confirmation that this organization is funded by and operating in the interests of tobacco companies, governments should ensure that their relationships with this entity meet Canada’s international treaty obligations.

Tobacco companies are the “founding directors” of  VITA

The Vaping Industry Trade Association (VITA) was established in the summer of 2019 to replace the Electronic Cigarette Trade Association (ECTA). It was incorporated on September 19th. Whether the choice of the acronym VITA – the latin word for life – was made with a sense of irony or denial is not known at this point. 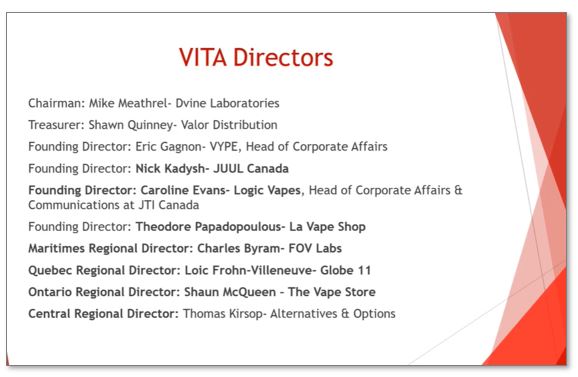 All but one of the “founding directors” of the new organization are identified as the PR-directors of 3  “tobacco-affiliated” e-cigarette producers active in Canada: Imperial Tobacco Canada (VYPE), JTI-Macdonald (Logic) and JUUL. “Tobacco-affiliated” is the term used by VITA. There is a 4th tobacco company which sells e-cigarettes in Canada (Imperial Brands, Blu), but it is not a member of the Canadian cigarette oligopoly and we are informed that it is excluded from becoming a member of VITA.

[VITA says that 2 other founding directors are on the board as chairman and treasurer and that Imperial Brands is not banned from joining the organization.]

It was confirmed to us that these “tobacco-affiliated” organizations have provided a 3-year funding commitment to the organization. Other members do not have to pay dues during this period.

[VITA says that “tobacco-affiliated” organizations pay 50% of the $600,000 annual contribution by founding directors, and that other members pay when joining.] 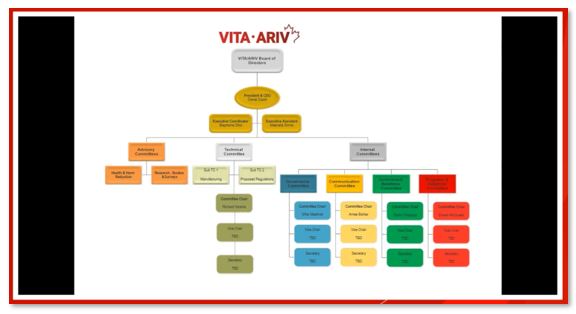 Of the 5 operating committees of VITA, three are chaired by “tobacco-affiliated” employees:

The committees that are chaired by vape shop owners are the governance committee and the programs committee.

In addition to Glenn Thibault, VITA has engaged other former politicos to influence opinion and regulation. Among those presenting at the webinar were:

Charcoal Marketing has been hired to roll out a social media campaign, focusing first on British Columbia and then in other provinces where the industry feels vulnerable to increased regulation (British Columbia, Quebec, Ontario, Alberta and Nova Scotia).

The key messages for this campaign combine promotion of the product class as “safer” and also re-deploy familiar tobacco industry campaign themes. 1) virtue-signalling of intent to protect children and 2) discrediting of public health concerns. (The traditional third arm of argument is to predict dire unintended consequences of regulations).

[Vita says this is not their campaign’s goal.]

VITA has hired a controversial physician to plead its case.

On November 19, VITA announced that they had hired Dr. Mark Tyndall. The press release says that he was hired to advise and help interpret new evidence. But VITA members were told last week that his job is also to promote vaping to the medical community.On the same day that his appointment was announced, Dr. Tyndall tweeted in support of the rights of vapers. His twitter profile does not yet acknowledge that he is a paid influencer.

[VITA says Dr. Tyndall “has been brought on as theharm reduction advisor, and health related spokesperson to VITA, as referenced in this publicly available pressrelease. Dr. Tyndall will advise VITA on how to promote vaping as a harm reduction strategy for people who smoke cigarettes and help with the interpretation and application of emerging scientific evidence on vaping …”]

VITA and the Framework Convention on Tobacco Control

How should governments, the media and the public manage their relationships with this new  industry group? Guidelines for interaction with tobacco interests are provided by the Framework Convention on Tobacco Control. As a party to the Framework Convention on Tobacco Control, Canada (including provincial governments) are committed “to protect these [public health] policies from commercial and other vested interests of the tobacco industry.”

Among the guidance given to government in implementing these guidelines are the following: