How much do tobacco companies make in Canada?

Answering that question became more difficult about a decade ago, after all three of the traditional tobacco companies (BAT-Imperial Tobacco Canada, PMI-Rothmans, Benson and Hedges, and JTI-Macdonald) became fully-owned subsidiaries of multinationals and the fourth (Grand River Enterprises) remained a privately held operation.

Over the past year, however, data on the earnings of some of these companies has become available from a number of sources. Using the data sources detailed below, we can now estimate that:

In the data released in the early new year, Health Canada identified that gross sales revenue (exclusive of excise tax and operating costs) on sales of 23.9 billion cigarettes was $4.19 billion (gross revenue of $0.18 per cigarette). This average would include all companies and all sales, including exports and duty-free. 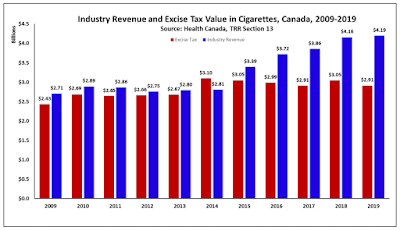 In previous years, Health Canada has identified that cigarette sales represent about 94% of the value of the tobacco market, and that the three major companies receive 91% of the sales.

It has been many years since tobacco companies routinely provided investors with financial data about their Canadian operations. (See historic note below.)

Yesterday, however, Philip Morris International reported on 12 weeks of sales in 2019. For the period before it “deconsolidated” its Canadian operation on March 22, 2019, it sold 1 billion cigarettes in Canada that were trademarked to Rothmans, Benson and Hedges in Canada, and declared operating revenues were USD 181 million (equivalent to CAD $250 million). 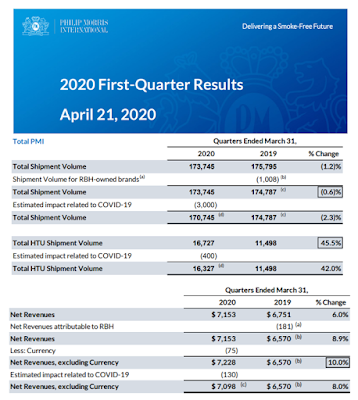 Some financial information was released during the class action trial whose ruling precipitated the CCAA actions. In 2015 ruling Justice Riordan disclosed some information from financial records the companies had insisted remain confidential:  [1071]  For ITL, the five-year average of before-tax earnings between 2009 and 2013 is $483,000,000.  For RBH, it is $460,000,000.  JTM’s “Earnings from operations” for the period average $103,000,000.  The Quebec Court of Appeal later made public annual reports for 2013 and 2014 for Rothmans, Benson and Hedges and Imperial Tobacco Canada.

Filings in the CCAA Proceedings:

For over a year now, the three largest tobacco companies operating in Canada have been operating under the provisions of the federal Companies’ Creditors Arrangement Act. This unusual circumstance was triggered when the Quebec Court of Appeal upheld a lower court ruling against the companies, ordering them to pay several billions of dollars to Quebec smokers whose cancers and lung disease could be attributed to the companies’ wrongful actions in previous years.

The CCAA process has effectively stopped the clock on all the lawsuits against the companies, while they attempt to arrive at a settlement with all of the provinces, class actions and others suing them. One of the requirements imposed on the companies for the privilege of this ceasefire is a requirement to stop sending their earnings to their parent companies and to reveal their financial picture each time they ask the court for an extension to the stay.

This information was provided for 45 weeks of operation 2019 and can be found in a series of Monitor’s reports for each company (listed below). Each accounting firm uses somewhat different categories to state income and expenses, in ways that impede consolidating the data.

For decades, two of the companies (Imperial Tobacco Canada Ltd and Rothmans, Benson and Hedges) were components of Canadian publicly-traded corporations (Imasco and Rothmans Inc). As such, they submtited annual reports and other documents with stock-market authorities. After they became fully-owned subisidaries (Imperial Tobacco acquired by British American Tobacco in 2000 and Rothmans Benson and Hedges acquired by Philip Morris International in 2008), these reports were no longer required. The records, however, remain available on the SEDAR website (Rothmans Inc and Imperial Tobacco).  The third-largest company, now JTI-Macdonald, was never publicly traded. It was a private company owned by the Stewart family until 1974, when it was sold to Reynolds and subsequently re-sold to Gallaher and then Japan Tobacco. Through all those structures, the revenues and profits of that company have rarely been disclosed.