Last week Imperial Tobacco Canada Ltd. launched a new campaign using the industry’s decades’ old strategy of invoking medical experts as pitch-men for their products. This post documents how this campaign (a)  continues the industry’s historic marketing practices, (b) is a transgression of federal law and (c) is nonetheless likely to be permitted to continue.

DEJA VU ALL OVER AGAIN 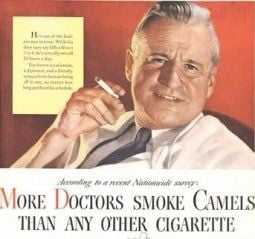 A century ago, governments were not overly worried about the long-term consequences of smoking cigarettes. But there were concerns that throat irritation and coughing were signs that cigarettes might be harmful. To allay these concerns (and sideline critics), the companies displayed medical endorsement for their brands such as “More Doctors Smoke Camels”. “Physicians say LUCKIES are less irritating”. “L&M Filters are just what the doctor ordered”.

Today, our government is not overly worried about the long-term consequences of vaping, although short-term adverse effects on blood vessels and airways are likely to lead to serious disease, just like they do for tobacco. To allay these concerns (and sideline critics), the companies are using the same playbook: undermine science linking their products to harm, mobilize third-party validators, create phony grass roots organizations, manipulate health regulators. 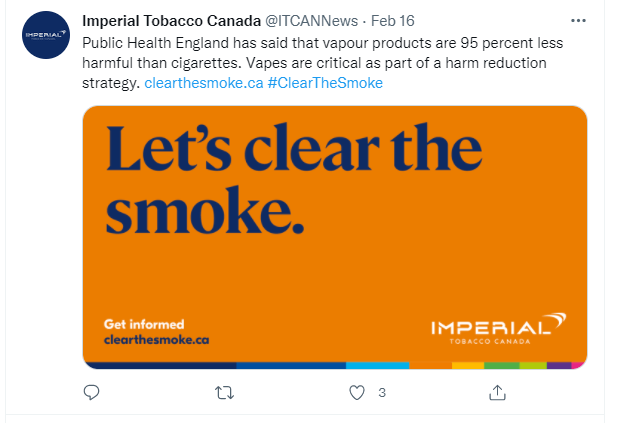 Imperial Tobacco’s Clear the Smoke is the newest marketing arm of this approach in Canada (RBH’s UNSMOKE campaign is another).

The communications objective is for the public to see vaping products as a relatively benign product, and to foster an environment where they are regulated as low to medium-risk consumer goods. The company’s strategy is to be seen as aligned with government and as ‘part of the solution’. The main tactic in this campaign is the use of credible health authorities as third party validators.

The advertising copy is direct quotes from researchers, governments and public health agencies. Health Canada’s views are given high profile: “Switching from tobacco cigarettes to vaping will reduce your exposure to many toxic and cancer causing chemicals.” “Vaping products and e-cigarettes deliver nicotine in a less harmful way that smoking cigarettes.” “Vaping is less harmful than smoking.” Other Canadian health voices are also present, including the Heart and Stroke Foundation, and researchers at the University of Waterloo.

The views of some organizations appear to be fairly represented, while in other cases the ads leave the impression that the organizations are more favourable towards e-cigarettes than they are.

Although Imperial’s campaign does not display trademarks or other brand elements used in selling its VUSE brand vaping devices and liquids, there is little doubt that Clear the Smoke meets the definition of a promotion under the federal Tobacco and Vaping Products Act (TVPA): “a representation about a product or service by any means, whether directly or indirectly, including any communication of information about a product or service and its price and distribution, that is likely to influence and shape attitudes, beliefs and behaviours about the product or service.” (s. 18 (1))

This law also makes clear that suppliers are not allowed to promote vaping products by using testimonials or endorsements (s. 30.21(1)); or by creating erroneous impressions about health impacts (s. 30.42(1); or by causing people to believe that “health benefits may be derived” from vaping (s. 30.43(1)); or by suggesting that vaping is safer than smoking (s. 30.43(2)).

This law applies to all forms of promotion for vaping products, and not just promotions which mention brands or contain specific brand elements (s. 2). It defines a promotion to include both direct and indirect communications that are “likely to influence and shape attitudes, beliefs and behaviours”. (s. 18 (1)). The penalty for breaking these sections of the law is fines of up to $500,000 or up to 2 years in prison (s. 47).

In addition to the provisions of the law, there are additional restrictions in theVaping Products Promotion Regulations which prohibit ads for vaping products or brand elements which can be seen or heard to young persons.

The TVPA includes some freedom-of-expression exemptions. For example, individuals not involved in the production or sale of vaping products and who are not paid by manufacturers or retailers can promote vaping products when doing so as part of an artistic work (a book or film, for example), or as part of a commentary, report or opinion. These exemptions do not apply when the promotions are accompanied by payment from a manufacturer or retailer. (S. 18(3)). As a manufacturer, Imperial Tobacco does not qualify for these exemptions.

The Clear the Smoke campaign is an obvious infringement of the TVPA, and it may also run afoul of other federal laws. The Competition Act (s. 52(1)), for example, prohibits false or misleading advertising. Many years ago, the government agency charged with administering those provisions intervened to stop tobacco companies from marketing “light” cigarettes. In this case they could well find that this campaign is misleading both with respect to the health consequences of vaping and also misleads the consumer with respect to the endorsement of many agencies. 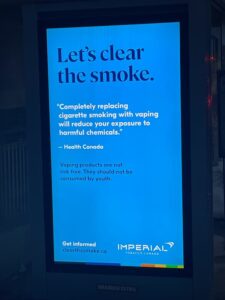 This bus-shelter ad seen in Ottawa this week contravenes the TVPA and its regulations because it is a representation about vaping products which seeks to influence attitudes and beliefs and:

1) can be seen by young people
2) displays third-party endorsement
3) is likely to cause people to think that vaping is safer than smoking.

Under the Quebec Tobacco Control Act, for example, advertising for vaping products is under the same restrictions as tobacco products. This law bans all direct and indirect advertising that contains testimonials or endorsements, uses a slogan, contains a text that refers to real or fictional persons, or is likely to create an erroneous impression about the health effects. (s. 24). The Quebec Consumer Protection Act prohibits manufacturers from omitting important facts in any promotions (s. 228) – important facts would include the documented health harms associated with e-cigarettes.

With the potential of a half-million-dollar fine or jail time, one might think Imperial Tobacco is taking a risk in launching this new campaign. In the current environment, however, they may well calculate that they will be able to run an illegal campaign without incurring penalties.

Enforcement history is on their side. Despite hundreds of observed infractions, Health Canada has not yet laid any charges for illegal vaping promotions. The department’s enforcement approach relies on warnings and “negotiated compliance” before any legal action is taken, and it often takes weeks before a compliance requeste is officially made. This ‘yellow card’ system, coupled with the time that it takes for the department to issue a warning, will allow the company to run its campaign for a typical month before allowing it to disappear quietly.

Imperial Tobacco has run illegal campaigns without penalty before. In September 2018 the company launched its ePen3 device using widespread television advertising. The lifestyle imagery in the ad was illegal, but it took Health Canada almost two months (from Labour Day weekend to November 1st) before the company was asked to take down the campaign. Even though the ad was broadcast more than 1,000 times after the company was told to “immediately cease”, no charges were laid and no penalties incurred. (The ad can still be viewed on YouTube). 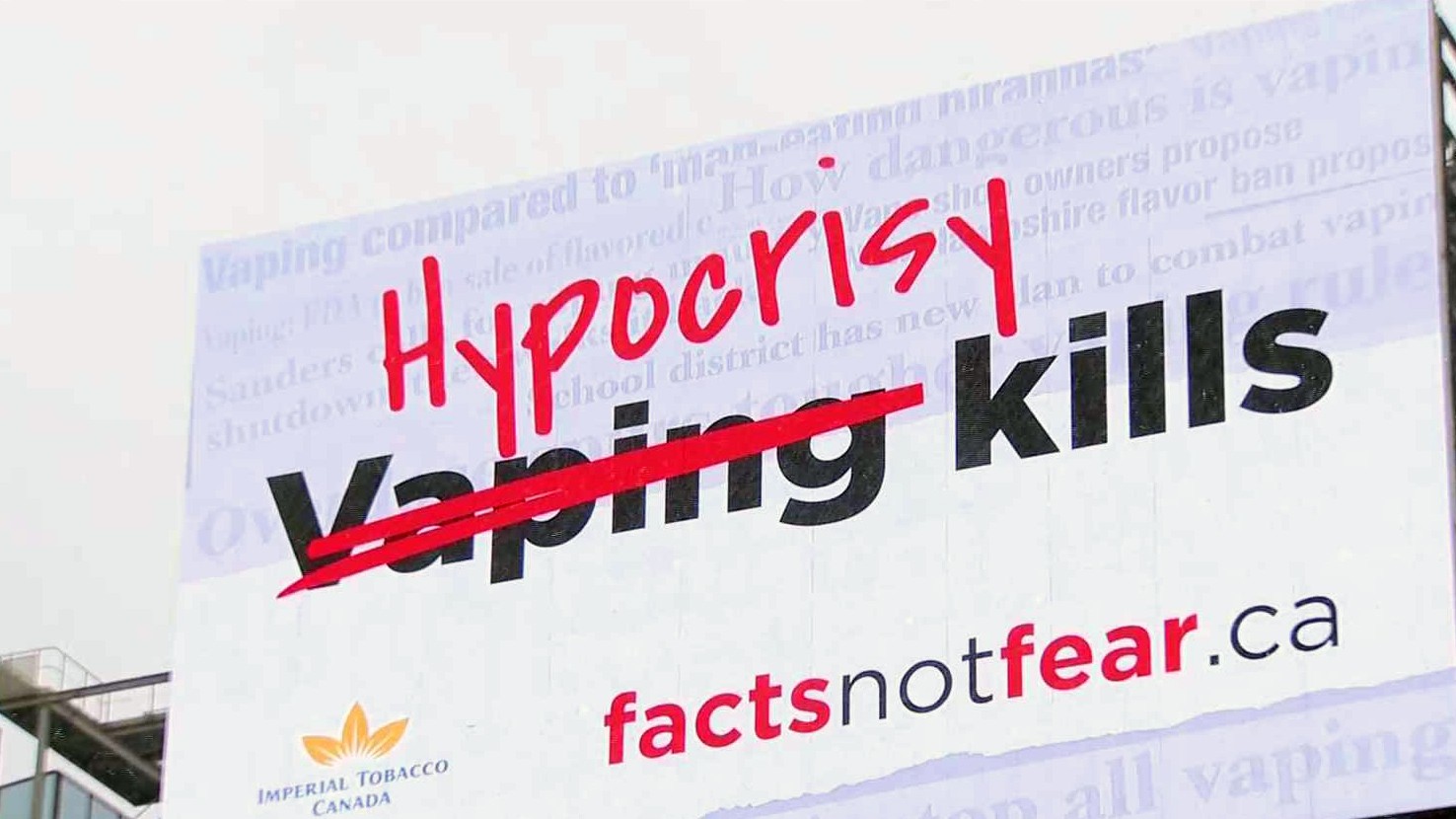 In 2020, this company initiated a “Facts not Fear” campaign (the website is still active), which similarly offered a health reassurance message on vaping. Although Health Canada and the government of Quebec were reported as investigating this campaign, no compliance action was ever made public. (In 2020 we notified the Competition Bureau about the campaign, but have not yet received a reply.)

Federal policies on vaping will complicate enforcement. Health Canada’s harm reduction approach to tobacco is only briefly described. Nonetheless, the department has put much on the record that could make it difficult (or at least embarrassing) to prosecute the company for quoting the department. In 2018 the department initiated a fast-track process to give the companies the right to make 7 relative risk statements, very similar to those Imperial Tobacco is using in its campaign. During the public consultation in the fall of 2018, concerns were raised about the public health impact of these statements, the department’s Vaping Advisory Board did not concur with the proposed wording, the government received contrary advice from other scientists and the government’s public opinion research revealed significant discomfort to some of the statements. Although the department subsequently dropped the idea of regulating relative risk statements, its earlier exploration of the idea could complicate efforts to discipline Imperial Tobacco for assuming that right.

The Clear the Smoke campaign is a reinvention of the “scientific controversy” efforts by the industry to cast doubt on the causal relationship between smoking or second-hand smoke and disease. Although the financial relationship was not disclosed for decades, they engaged prominent Canadian scientists – like Hans Selye – to encourage law-makers to see cigarettes as a necessary product for some smokers. These actions, Canadian courts have ruled, were wrongful as they “impeded and delayed” Canadians from learning about the harms of smoking.

Today’s tolerance of vaping product promotions by Health Canada echoes the departmental view in the 1970s that restrictions on tobacco advertising should be avoided because this would “reduce the oportunity to encourage smokers to switch brands.” and make it more difficult to keep “using industry marketing process to promote low tar cigarettes and achieve other health objectives”.

On the same week this campaign was released, American historian Robert Jackler published his analysis of recent efforts by some tobacco companies to create a climate friendly to their newer products. He links these new campaigns to historic efforts by tobacco companies to portray themselves as reformed and to obfuscate the health harms of their products. He notes that such ads “gaslight” the public through “copious repetition of untruths, into doubting well-established scientific truths.” He calls on newspapers and other media to reject these ads.

Newspapers and billboard owners have the right to reject these ads – but Canada’s government has a duty to stop them. Our letter calling on them to enforce the TVPA can be downloaded here.