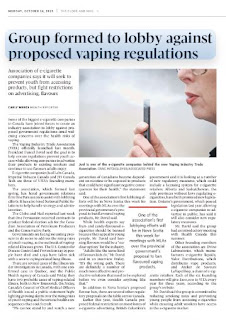 The news on page 3 of this morning’s edition of the Globe and Mail was a report from Carly Weeks that Canada’s 3 big tobacco companies have set up a new lobby group to oppose vaping regulations. Surprise, Surprise.

In fairness, the news was already 3 weeks old. The launch of the Vaping Industry Trade Association (VITA) was announced through a press release issued on September 19th. This came on the same day that major health organizations demanded immediate tightening of regulations on vaping products. Coincidence? Perhaps. The organization had been planned for some while, as its website – vitaofcanada.com – was registered earlier this spring.

This is not the first or the only Canadian vaping industry lobbying group. The Canadian Vaping Association has made its views known to legislators and policy makers for a number of years. But there is an important distinction between these two groups, and the CVA is no friend of big tobacco. Its members are the specialty vaping shops whose grey-market business was disrupted when the federal government legalized the sale of e-cigarettes last year. Recently, this organization has called for the sale of vaping devices to be removed from corner stores. Convenience stores are arguably the ground zero of the youth vaping epidemic, but they are also the main route to market for the products sold by tobacco companies, and are the main competition to the CVA membership.

What is important to take away from today’s story is that Canada’s 3 big tobacco companies — Imperial Tobacco, JTI-Macdonald and Rothmas, Benson and Hedges – are working together to influence government policy and that they are partnered with well-connected PR firms to oppose health regulations.

In short, these same companies are using the same strategies for the same purposes as they did with cigarettes a few decades ago — strategies that have been denounced by Quebec courts as being an unlawful conspiracy.

The companies unlawfully conspired through the CTMC, say the courts.

It is not even 8 months since the Quebec Court of Appeal issued its judgment against these companies. After combing through decades of evidence and many thousands of exhibits detailing  their actions, the Appeal court upheld the 2015 verdict of Justice Riordan. In its unanimous 5-judge ruling, the Appeal Court also found that the tobacco companies had used their lobbying agency,  the Canadian Tobacco Manufacturers Council (CTMC), as a way to delay regulations and prevent  smokers from learning how harmful their products were. The courts described these actions using terms like “conspire” and “collude”.

Their CTMC lobbying contributed to the courts’ decision to hold them liable for the injuries suffered by some Quebec smokers:

“By engaging in this collusion for several decades in …  the activities of the Ad Hoc Committee and thereafter the CTMC, the appellants jointly participated in a wrongful act which caused injury.”

The courts found that the companies’ bad faith efforts were not limited to government- and public-relations activities.  Their marketing practices were also found to be misleading, and part of an attempt to offer false reassurance to smokers or “lull” Canadians into a sense of non-urgency about the health risks.

(Quebec smokers have yet to receive a penny of the $13+ billion damages the court ordered — but that is another story.)

Déja vu all over again

Like the CTMC in the 1960s, VITA was created this year in the wake of rapidly growing public, scientific and government concern about the harmfulness of nicotine products.

It was in 1962, after the UK Royal College of Physicians published a report condemning smoking as a cause of lung cancer that the Canadian tobacco companies laid down the basis of a public relations effort that would last for decades. They did so only when medical evidence of harm had reached a tipping point, and when major health bodies – like the Canadian Medical Association – were urging the government to do something to address this newly-understood problem.

Their PR campaign soon became formed as an “Ad Hoc Committee” to manage government relations, and then institutionalized into the CTMC. (You can read more about this sad history in paras 1000 to 1648 in a 2014 legal filing)

Sixty-plus years later, VITA was created in similar circumstances. The summer of 2019 was a blizzard of news stories about vaping – Congressional hearings, FDA enforcement actions, health bulletins! As the evidence accelerated, Canadian governments too were under increased pressure to force changes to the vaping market.

It was wrong then. Can it be less wrong now?

There is a direct parallel between the conspiracy that was so carefully documented and denounced in the Quebec class actions and the public relations efforts of the Canadian companies this fall. As before, instead of reaching out to provide customers with information about new research, the companies are today trying to deflect those concerns and convince the public that there is no urgent need for action.

Imperial Tobacco’s press release from September 19 2019 is an example of how the company seeks to offer reassurance by dissociating its products from any documented health problems and to deflect concern to other possible causes of any adverse health effects.

There are echoes too in the packaging and marketing of the products, and the ways in which these fail to provide adequate warnings as they seek to diminish health concerns. From the Quebec court rulings, we now have very concrete and specific requirements for a manufacturers’ duty to warn. (It is found in para 227 of Justice Riordan’s ruling and is also pasted below). The warnings on the vaping products and advertisements today fall far short of this mark.

There are other ways in which today’s vaping advertisements run against the court rulings because they would lead a “credulous and inexperienced consumer” to misjudge the health harms of the product being advertised. No regulator, so far as we know, has asked a court to consider whether campaigns like “looks small, hits big” mislead consumers in this way.

The Quebec courts have said this type of behaviour is wrongful. But that ruling is one made in hindsight – and does not appear to have had a preventative effect. Stronger health laws are needed to change the marketing of vaping products — The core job of VITA is to prevent those laws from happening.

In the United States, the companies are adopting a different public relations strategy.At the end of September, JUUL announced that in the United States it would put down lobbying and marketing tools. It said it was “refraining from lobbying” the federal government and “committing to fully support and comply” with federal law. It pulled out of financing a referendum to overturn San Franciso’s ban on e-cigarettes.There are reasons why the companies take a different approach in the USA. The regulatory environment is different south of the border, where e-cigarettes have not yet been approved for sale by the FDA. Their sale is being allowed while the approval process is underway, but a decision is on the horizon.

In Canada in 2018, Parliament decided that it was in the public interest for these products to be marketed. No company is required to get approval, and there are negligible constraints on the product designs that can be introduced.

In the FDA system, the onus is on people wishing to introduce a new product to the market to demonstrate that doing so is appropriate for the protection of public health and provide evidence to this effect.

In Canada, at the federal level at least, the regulatory burden is on government, not industry. It is government which must demonstrate that a new regulation is appropriate for the protection of health and which must provide evidence of economic benefit to doing so.

What’s a government to do? Just say no to VITA.

Canadian governments which wish to avoid repeating the mistakes of the past should give wide berth to tobacco industry lobbying groups. Support for governments refusing to meet with the tobacco/vaping industry and its proxies can be found in a number of places.

For example, the global tobacco treaty – the Framework Convention on Tobacco Control — requires that parties (like Canada) protect public health from tobacco industry interference. There are guidelines laid down on how to do so. Ten of 33 countries were recently assessed as doing better at this than Canada.

The Quebec Court of Appeal gives additional comfort for keeping lobbyists at bay. In its March 2019 ruling, it wagged its finger at the federal government for having given too much access to the CTMC.

[494] … [The federal government] maintained a close relationship with their lobbyist, the CTMC, and so forth. Perhaps the government could even be accused of giving the impression, through this accredited collaboration, that tobacco was not really harmful or that it was not as harmful as some claimed, which was an impression that the appellants themselves were busy spreading, maintaining and building. Perhaps the government actually knew as much as the appellants about the dangers of cigarettes and should have banned the product or more severely restricted its distribution and above all should have done so sooner (the government didn’t start until 1988, with the Tobacco Products Control Act, which came into force in 1989). Perhaps the government failed to inform the public and displayed reprehensible inaction…

According to this morning’s report, VITA has set up meetings with legislators in Nova Scotia and has already met with Health Canada.

One sensible thing for Health Ministers to do would be to read the Quebec rulings and to counsel their staff against repeating the errors of the past.

Justice Riordan’s statement of a manufacturer’s duty to warn

227. Our review of the case law and doctrine applicable in Quebec leads us to the following conclusions as to the scope of a manufacturer’s duty to warn in the context of article 1468 and following:
a.  The duty to warn “serves to correct the knowledge imbalance between manufacturers and consumers by alerting consumers to any dangers and allowing them to make informed decisions concerning the safe use of the product”;
b.  A manufacturer knows or is presumed to know the risks and dangers created by its product, as well as any manufacturing defects from which it may suffer;
c.   The manufacturer is presumed to know more about the risks of using its products than is the consumer;
d.  The consumer relies on the manufacturer for information about safety defects;
e.  It is not enough for a manufacturer to respect regulations governing information in the case of a dangerous product;
f.   The intensity of the duty to inform varies according to the circumstances, the nature of the product and the level of knowledge of the purchaser and the degree of danger in a product’s use; the graver the danger the higher the duty to inform;
g.  Manufacturers of products to be ingested or consumed in the human body have a higher duty to inform;
h.  Where the ordinary use of a product brings a risk of danger, a general warning is not sufficient; the warning must be sufficiently detailed to give the consumer a full indication of each of the specific dangers arising from the use of the product;
i.   The manufacturer’s knowledge that its product has caused bodily damage in other cases triggers the principle of precaution whereby it should warn of that possibility;
j.   The obligation to inform includes the duty not to give false information; in this area, both acts and omissions may amount to fault; andk.  The obligation to inform includes the duty to provide instructions as to how to use the product so as to avoid or minimize risk.