Yesterday Alberta became the first province to say that it intends to put a tax on vaping products. The measure was announced in the province’s annual budget.

What took so long? Why are other governments not taking action?

By any number of criteria, health-oriented taxes and price controls are needed on vaping products, just as they are on alcohol, tobacco, cannabis and other products which cause harm.

E-cigarettes are unhealthily cheap in Canada

Vaping companies currently charge from $9 to $45 for their devices, and from $5 to $6.50 for a dose of nicotine equivalent to a pack of cigarettes. (A list of major products and their prices on the Canadian market can be found here).  Vaping products are cheaper in Canada than in other countries — for example, BAT charges its U.K. customers $33.40 for an e-pod device that costs $19.99 in Canada (The recommended selling price is $44 in Germany and $50 in the USA – all prices in $Cdn).

Taxes can increase the price of vaping devices, making it less likely that children will try them.

High prices are a barrier to impulsive and planned purchases. Children who might be tempted to buy a vaping product are more likely to do so when they are affordable. Most vaping devices currently market for about $20 Canadian dollars — roughly the same as a pizza.

Taxes are one way of applying the polluter pay principle to harmful consumer goods.

In Canada, vaping manufacturers and retailers are currently being given a free ride by the same governments that are struggling to manage a crises in youth vaping. Manufacturers and retailers contribute nothing to the significant regulatory costs that their harmful products require – not the costs of oversight (research, enforcement) and not the current and future costs of treating the illnesses caused by their business practices.

Many other countries and U.S. states are taxing e-cigarettes 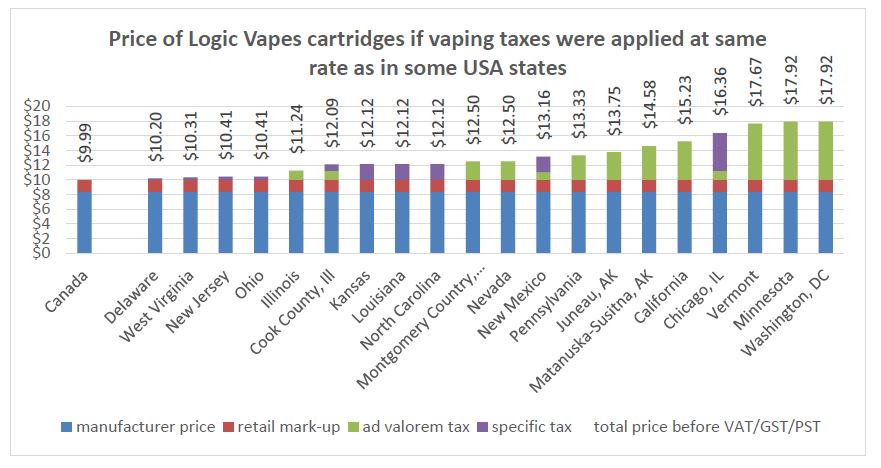 At least 26 countries and 17 U.S. states have applied taxes to vaping products or nicotine liquids. Information on these is conveniently assembled on the web-site https://vaporproductstax.com, and has been tabulated on a PSC fact sheet. If Canadian provinces taxed nicotine as Minnesotta and Vermont do, the price of a cartridge would increase from $5 to about $8.50.

The World Bank has some advice:

In a paper on e-cigarette taxes released earlier this year, researchers at the World Bank looked at the impact of price differences on youth e-cigarette use, and concluded that they would likely be effective at dissuading many youth from trying these products. The World Bank has researched and championed the use of excise taxes on tobacco products for decades, and this paper concludes that the same benefits could be expected from e-cigarette taxes.

The bank recommends that taxes be applied to three e-cigarette components: the amount of nicotine in the product; the volume of usable liquid product, and the devices or disposable e-cigarettes.

The price of e-cigarettes can be increased significantly and still be lower than cigarettes.

Even at these low cigarette tax rates, the price of vaping products could be doubled before there was a disincentive for smokers to switch to them. A better option yet would be to impose a significant increase on taxes and to implement standardized pricing to prevent price-promotions.