What happens when governments announce targets to achieve important public objectives, but then fail to develop adequate plans to achieve them? Or when their plans for achieving these targets are side-swiped by later events? Or swept aside by subsequent administrations?

Stewards of the environment have faced these challenges and have developed a system to improve the likelihood that climate change targets will be met by putting obligations on government to report on their plans and their results. Last week such obligations on the federal government became law — adding to the list of policy tools that are used for environmental protection that have not yet been adopted for tobacco control.

This post takes a look at the use of targets for tobacco control and climate change, and some additional policy tools that may be available for public health.

Canada’s strategies to control tobacco and to address climate change share a number of common characteristics. They both:

Over the past 30 years, the federal government has set several domestic and international goals to reduce tobacco use and to reduce greenhouse gas (GHG) emissions. Environmental goals are generally expressed as a percentage reduction in emissions equivalent to mega-tonnes of carbon monoxide (MT CO2 eq). Tobacco use goals are generally expressed as achieving a reduced level of smoking or tobacco use prevalence (generally interpreted as those who have smoked cigarettes in the past month).

A challenge facing both climate change and tobacco control strategies is meeting setting and meeting both long- and short-term targets. Federal climate change and tobacco use targets and actual results (mega-tons of greenhouse gas emissions and billions of cigarettes sold) are shown in the figure below. For the purpose of this illustration, smoking prevalence was translated into population-wide cigarette consumption. The data and sources for this graph is available for download here). 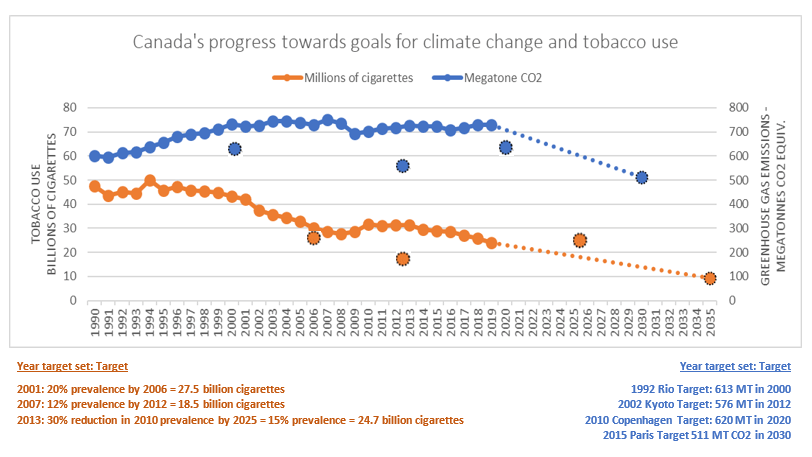 Federal and Provincial Tobacco Use Targets:

The federal government has adopted tobacco control strategies since 1963, but quantified targets for general prevalence were first adopted in 2001, when the aim was to reach 20% prevalence in 2006 and reduce cigarette consumption by 30%. The goal of 12% was subsequently set for 2012, and in 2017 Health Canada adopted the goal of “less than 5% tobacco use by 2035“. In 2013, as part of the World Health Organization’s Global NCD Action Plan, Canada participates in the goal of reducing smoking prevalence between 2010 and 2025 by 30% (from 20.8% to 14.6%).

Six provincial governments have set complementary targets for tobacco reduction and 7 provinces and territories have not quantified their objectives.

International alignment towards a 5% prevalence target.Most provinces and territories have not updated their tobacco strategies for several years. The exceptions are Quebec (2020), New Brunswick (2019), Ontario (2018) and Prince Edward Island (2017). More information on these goals and the strategies behind them is provided on a downloadable fact sheet. 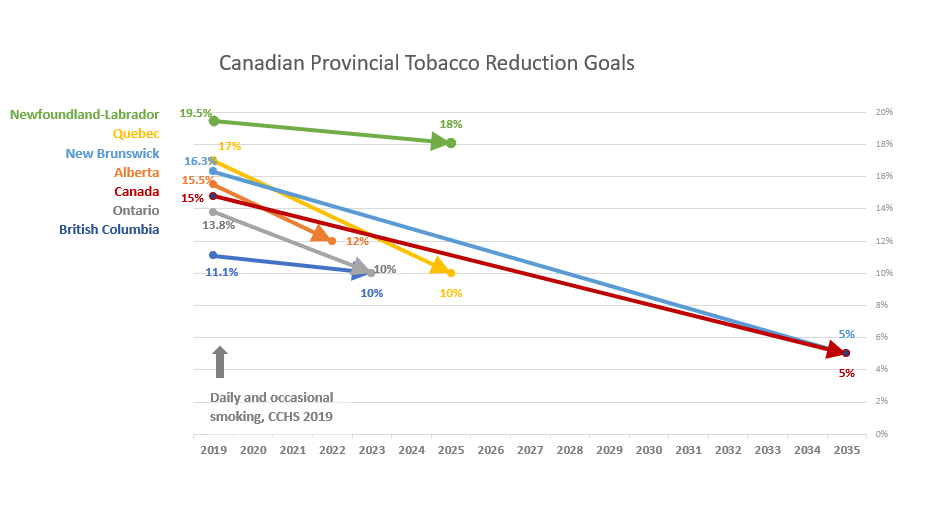 Canada is one of at least 8 other nations which have adopted a target of 5% prevalence, which is sometimes described as an “endgame” or “smokefree” target. There are differences among these countries with the behaviours that are included in this goal: some are targeting tobacco smoking (e.g. New Zealand), some target tobacco use (e.g. Canada) and one targets both nicotine and tobacco use (e.g. Finland). The countries also differ with respect to their time frames: two are aiming to achieve this objective by 2025, with others choosing 2030, 2035 and 2040.

On June 29th, 2001 Royal Assent was given to the Canadian Net-Zero Emissions Accountability Act. This new law, as the Library of Parliament describes it, “requires the Government of Canada to set national targets for reducing greenhouse gas (GHG) emissions and establishes a planning, reporting and assessment process with the aim of achieving net-zero emissions by 2050.”

Similar legislation is already in place in the United Kingdom, New Zealand, France, and Sweden, and in provinces like British Columbia, Manitoba and Nova Scotia. These laws all require governments to be transparent about the design, implementation and results of their climate change strategies, and to make their progress available for external review.

An integrated national plan of federal, provincial and territorial governments.

The Pan-Canadian Framework on Clean Growth and Climate Change is a national framework plan that includes commitments by federal, provincial and territorial governments. A federal-provincial approach for tobacco control formerly existed as the National Strategy To Reduce Tobacco Use (NSTRTU), which was in place from the mid 1980s to the late 1990s. This inter-jurisdictional approach was disbanded shortly after its last strategy was agreed to in 1999.

A phase-out plan for the most harmful products, and incentives to help make it happen

The climate change strategy includes the intention to phase out certain combustible products, including coal-fired energy and cars and passenger trucks. Federal regulations are being used to phase out coal-fired energy generators by 2030. The federal government also regulated an end to the sale of incandescent light bulbs because they were too energy inefficient. By contrast, Canada has not yet removed any category of tobacco products from the market (although it has removed the use of additives and flavourings).

The recent announcement that conventional cars and passenger trucks could not be legally sold after 2035 signals that economic incentives will be employed to help achieve the target. By contrast, incentives have generally not been used to accelerate changes to the tobacco use environment.

As a component of the pan-Canadian framework, provincial governments are free to set their own carbon pricing systems but the federal government will act unilaterally if provincial carbon pricing measures do not meet the national benchmark. The Greenhouse Gas Pollution Pricing Act ensures minimal use of pricing to reduce GHG.

A similar challenge exists for tobacco, where provincial taxes vary considerably across provinces. Provincial taxes in Quebec, for example, result in cigarettes in that province being markedly cheaper than in most other provinces. (They are also very cheap in Ontario). The federal government could close that gap, as it does for carbon, by applying a higher federal tax in Ontario and Quebec than it does in provinces which meet the internationally recommended level of 70% of purchase price. We have previously recommended that the federal government use its tax power to ensure a minimum $0.45 tax per cigarette.