This post provides updated information on cigarette sales and tobacco taxes in Canada. Links to Fact sheets with the data reflected in the figures below are provided at the bottom of the post.

Overall, tobacco tax revenues across Canada fell by 6% in 2021-2022 compared with the previous fiscal year.

All of the provinces experienced a decline in tobacco tax revenues, from a provincial total of $4.46 billion in 2020-21 to $3.95 billion in 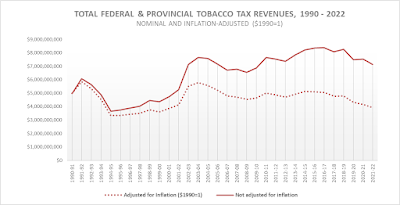 This was offset by a modest increase in federal tobacco tax revenues (3%), resulting from a $4 per carton tax increase included in the 2021 budget. At that time, Finance Canada predicted that this would increase revenues by $415 million — but the real increase was just over one-quarter of that prediction.

Almost all (94%) of the federal tobacco tax is collected on manufactured cigarettes, with taxes on cigars and loose tobacco totalling less than $203 million. Provincial governments do not provide detail on revenues from different types of tobacco. 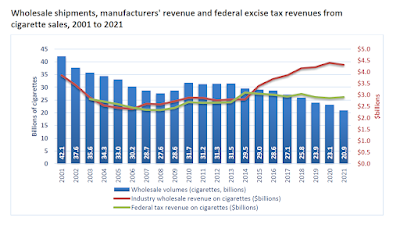 Tobacco manufacturers are required to report to Health Canada the number cigarettes they sell, and also to report on their wholesale revenues (including federal taxes) from these sales. This data is released by Health Canada in an aggregate form for each calendar year.

From this data a comparison with the revenues to manufacturers and the federal government from cigarette sales during the calendar year can be made. Since 2014, industry revenue has increased by $1.5 billion a year (54%), while federal tax revenues on the same sales have fallen by $190 million (-6%).

3) The average Canadian smoker provided governments with $1,862 in tobacco-specific taxes in 2021

Excise taxes on tobacco products are applied by all provincial and territorial governments, as well as by the federal government. The rate of tax varies across the provinces, as does the practice of applying additional sales taxes to these products.

In 2022, the federal government applied a tax of $29.79 to each carton of cigarettes. Provincial excise taxes ranged from $29.80 per carton (Quebec) to $65.00 (British Columbia and Newfoundland). The Northwest Territories applies the highest tax ($68.80 per carton). Almost two-thirds (64%) of Canada’s smokers live in Quebec and Ontario, where where tobacco taxes are lowest.

5) Tobacco taxes represent less than 1 cent for every dollar of Canadian tax revenue.

In Canada, tobacco tax revenues generally account for less than 1% of government revenues. The proportion is the lowest in Ontario (0.5%) and highest in Nova Scotia and Newfoundland and Labrador (1.3%).

▪ changing patterns of nicotine use (e.g. shifting to or away from e-cigarettes)
▪ variance in the estimates of smoking behaviours
▪ changes in the proportion of the market which is illicit/unreported.
▪ incomplete reporting by manufacturers

Between 2020 and 2021, for example, the change in the number of cigarettes sold and the change in the number of smokers was roughly comparable (-10% and -8%), as shown in the figure below. During the previous year, at the beginning of the COVID pandemic, there was a greater drop in the estimated number of smokers than in reported cigarette sales (-11% vs -3%). This suggests that factors such as the COVID-related changes to survey methods or the decreased availability of contraband may contribute to this discrepancy.