This week Health Canada released the results of its inspections of the instagram accounts of Canadian vaping suppliers. Just over half (53%) of the 304 suppliers failed inspection.

The industry fared somewhat better on this test than they did on the previous round of inspections of their retail stores in the summer and fall of 2019. On those occasions, fewer than 1 in 5 specialty vaping stores passed inspection (although the large majority of convenience stores did).

The willingness of so many vape stores to ignore federal health regulations is not only a challenge to public health authority, it is also a challenge for their strategies to protect the public from addiction and other risks associated with the repeated inhalation of vaping aerosols.

A few bad apples – or a scofflaw culture?

These poor inspection results could reflect a failure of certain operators to understand the law or ignorance of what is expected of them. Alternatively, the high rates of disobedience could reflect a culture of defiance and a general willingness of this business sector to defy public health direction.

It could be that these poor inspection results reflected a failure by many operators to understand the federal regulations or what is expected of them. Alternatively, the high rates of disobedience may reflect a culture of defiance and a willingness of this business sector to defy public health direction.

To assess this alternative, we conducted a survey of certain business practices of those suppliers who play a leadership role in the vaping industry. We identified the directors or spokespeople for the Vaping Industry Trade Association (VITA), the Canadian Vaping Association (CVA) and Rights4Vapers.

These suppliers in these positions include the e-cigarette branches of two international tobacco companies (Logic-JTI and VUSE-BAT), large Canadian and international manufacturers (Dvine, Flavourart, Snowplus Tech), wholesale distributors (Pacific Smoke, Valor, Globe 11 ) and111 independent retailers. JUUL was also included in thestudy because of its importance in the industry and its previous directorship of VITA. Logic-JTI was included even though it was scheduled to close its Canadian operations in early August.

Of these 20 businesses, all have websites and 12 use these websites to offer on-line sales and delivery. These websites were reviewed to assess compliance with a selection of provincial and federal vaping regulations, including whether they:

Their prior business record was reviewed, and evidence sought whether they:

I. had been in operation when the sale of vaping products was illegal in Canada
J. had previously been identified as non-compliant during Health Canada’s 2019 inspection of brick-and-mortar retail stores

The results of this inquiry were documented in a report, “The compliance of Canada’s vaping industry leaders with seslected federal health regulations”, which can be downloaded here.

Five key findings are described below.

The only two companies which were found compliant with all measures relevant to their online operations and consumer sales were those managed by two of the world’s largest tobacco companies: Logic vapes, managed by Japan Tobacco’s subsidiary JTI-Macdonald, and VUSE, managed by British American Tobacco’s subsidiary, Imperial Tobacco Canada Ltd. JUUL had the next highest compliance rate, failing only with respect to its apparent willingness to ship to Nova Scotia and Prince Edward Island.

Three of the 11 independent vaping specialist retailers conducted online sales. Other than with respect to nicotine concentration, these companies were generally non-compliant with all of the other measures. 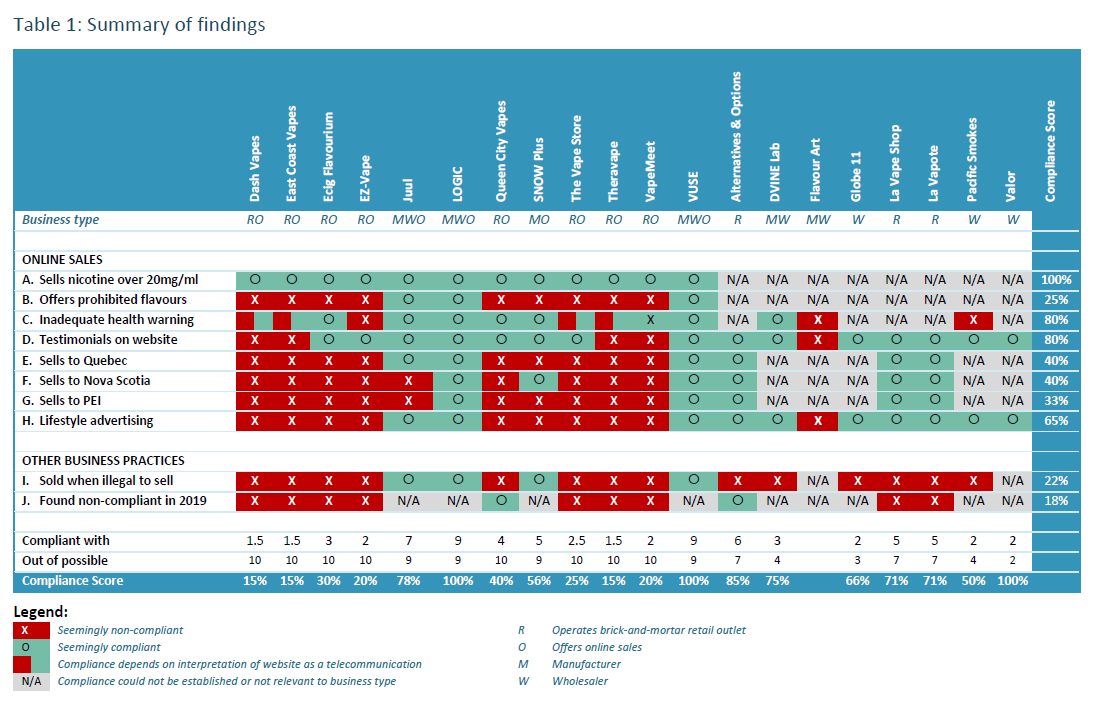 2. Retailers and manufacturers use code-names and advertising copy to circumvent prohibitions on promoting flavours.

Canadian federal law does not currently ban the sale of any flavours, but it does prohibit the promotion of certain types of flavourings. Under the Tobacco and Vaping Products Act  “No person shall promote a vaping product … through an indication or illustration… that could cause a person to believe that the product contains [confectionery, dessert, cannabis, soft drinks, energy drink]”.

This review found that more than one in ten (13%) of the flavour offerings displayed on the websites of the 12 companies offering on-line sales were found to promote a prohibited flavour (187 of 1,431 flavour-offerings). Although the prohibited flavour was rarely displayed on the product, its taste was promoted through suggestive words, through additional description or by statements attributed to other consumers. The websites of nine of the on-line retailers (75%) displayed such flavour promotions.

Cotton candy flavour was called Blue Carnival, Pink Fluff or Cotton Fluff, or was accompanied by a flavour description like “imagine what Pink Fluff tastes like (Make sure you are thinking of a theme park.)”

Apple Pie flavour was called Apple 3.14 or 3.14 crust or was described as “Ripe and mild apple with a crust.”

Orange Soda was called Orange and So or Orange Sparkle, and was described as “A delicious orange bubbly beverage.”

Slushy flavoured vape juice was illustrated with a slush-drink and called “slushnado”.

Federal regulations require all vaping product advertisements (including display of product) to be accompanied by one of two health warnings mandated by the Vaping Products Promotion Regulations:

EZVape: Not compliant (no health warning)

Of the 20 websites reviewed, half were compliant with the regulations, either because the nature of the website did not require one (5 websites) or because the warning met the requirements (5 websites). Among the others, seven displayed warnings that were smaller than required by regulation and three did not provide a health warning.

Nonetheless, nine of the 12 companies which sell products on line appeared willing to accept orders for flavoured vaping products and to ship them to those three provinces. Their willingness was indicated in their shipping policies or was established by processing a test order up to the point of payment.

The two companies which were not willing to do defy any of these provincial restrictions were those managed by tobacco companies: Logic (JTI-Macdonald) and VUSE (BAT-Imperial Tobacco). JUUL was willing to sell to Prince Edward Island, but not to Quebec or Nova Scotia

5. Most vaping industry leaders have a prior record of non-compliance

Three-quarters of the companies in leadership positions within the vaping industry have a history of non-compliance with federal health regulations.It was illegal to sell nicotine vaping products in Canada prior to May 23, 2018 unless approval had been given under the Federal Food and Drugs Act. Health Canada made this clear in 2009, making public its efforts to contact retailers and direct them to stop selling these products.

Of the 20 leading vaping companies reviewed, 15 had defied this instruction and were actively selling vaping products prior to May 2018. The companies which respected the prohibition on selling in Canada were those tobacco-industry associated suppliers (Logic, VUSE, JUUL) and a multinational manufacturer which began operations after 2018 (Snowsplus Tech). No information was found for one wholesaler.

In 2019 Health Canada conducted about 1,000 inspections of brick-and-mortar specialty vaping stores, finding that most (84%) were promoting products in ways that were not allowed under federal law. Of the 11 brick-and-mortar retailers who have leadership positions in these trade associations, 9 were identified as non-compliant in Health Canada’s inspection reports. (Because Health Canada did not make public the names of the stores which passed inspection it is not possible to conclude that the other two stores were compliant).

The Canadian vaping industry was developed as a black market and appears to continues to operate with a level of disregard for the health regulations set by federal and provincial governments.

The three inspection reports made public by Health Canada establish the challenge faced by government in implementing measures to protect young people and non smokers from being encouraged to use (and become addicted to) these products and to protect vapers from marketing that interferes with knowledge of the risks involved.

Our review of the websites managed by the industry’s leaders provides additional evidence that the vaping industry’s failure to comply with health regulations does not likely result from a poor understanding of the law, but more likely reflects a willingness to flout it and to undermine its purpose.

In 2019, Health Canada wrote vaping and retail organizations to emphasize that “this level of non-compliance is unacceptable.” To date, however, the department appears to have largely focused on sending warning letters, not imposing fines for non-compliance. Parliament set significant penalties for breaking the law (up to $500,000), but a penalty can only result from the federal government taking offenders to court.

Public health authorities currently cannot rely on vaping product suppliers to comply with health regulations. Increased enforcement activities are justified, as is consideration of alternative methods to manage this market.

The report “The compliance of Canada’s vaping industry leaders with selected federal health regulations” can be downloaded here.