Earlier this week, Statistics Canada made available the public use microfile for the second wave of the Canadian Tobacco and Nicotine Survey. The agency has further modernized its data release methods, and the file is easily accessible to the public. This post looks at some key findings from this survey – more detail and data tables are available on a downloadable fact sheet.

Background on The Canadian Tobacco and Nicotine Survey (CTNS)

The CTNS was put in place in late 2019, following a decision to terminate the biennial Canadian Tobacco, Alcohol and Drug Survey (CTADS) after 2017. The first wave of the CTNS was conducted in October to December 2019, with the second wave repeated in December 2020 to January 2021. The first results of the CNTS 2020 were released byStatistics Canada on March 17, 2021.

This survey asked questions of 8,112 Canadians, although only 41% of those who were asked to participate agreed to do so. Four times as many Canadians participated in CTADS, and the Canadian Community Health Survey gathers information from more than 10 times as many people.

The small sample size of the CTNS severely limits the usefulness of the survey to assess differences between provinces or over time. A survey of this size does not provide for monitoring of the impact of regulatory change. For example, Nova Scotia’s ban on flavoured vaping products had been in effect for more than 8 months before the survey was taken, but the sample size for Nova Scotia (404) was too small to produce enough vapers to meet Statistics Canada’s quality standards for release.

As a result, we are not permitted to report that the CTNS found that most Nova Scotia vapers were continuing to access flavours in that province, even though the sale of those flavours had been prohibited for several months. Had the sample size been larger, we could likely have provided evidence that this public health protection has been undermined.

There is little difference in the estimated proportion of Canadians who have used e-cigarettes in the past month between late 2019 and late 2020. This is observed across all age groups.

2. Four in 10 Canadian vapers are under 25 years of age. Three in 10 have never smoked cigarettes. 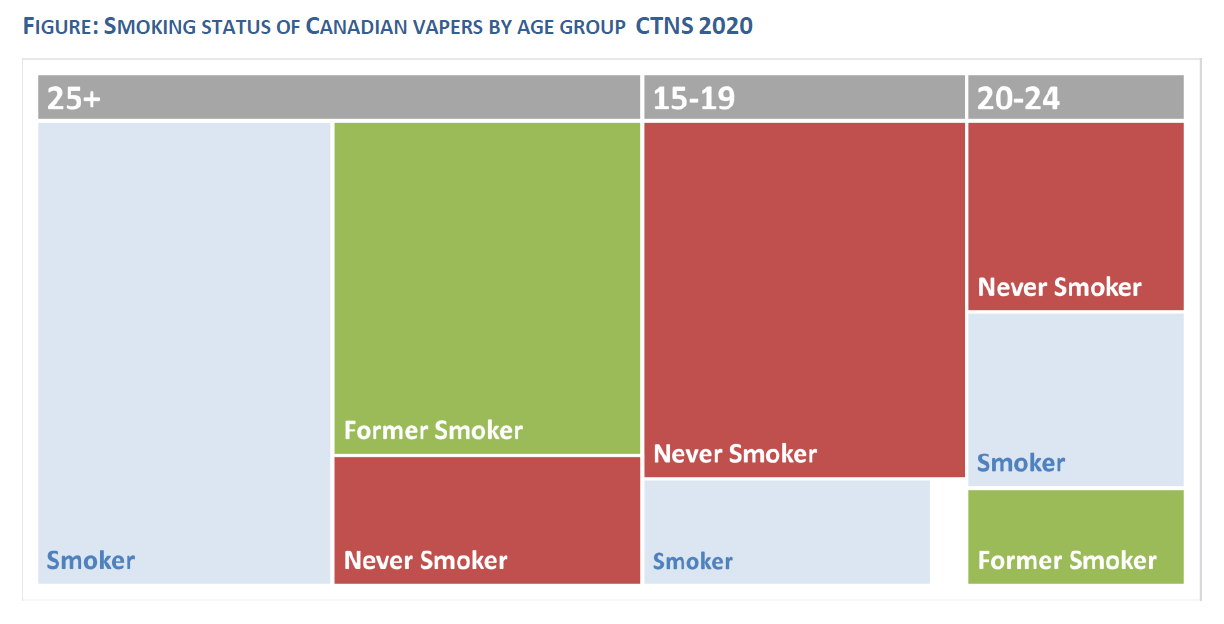 3. For every 100 people who had tried vaping, 14 became daily users 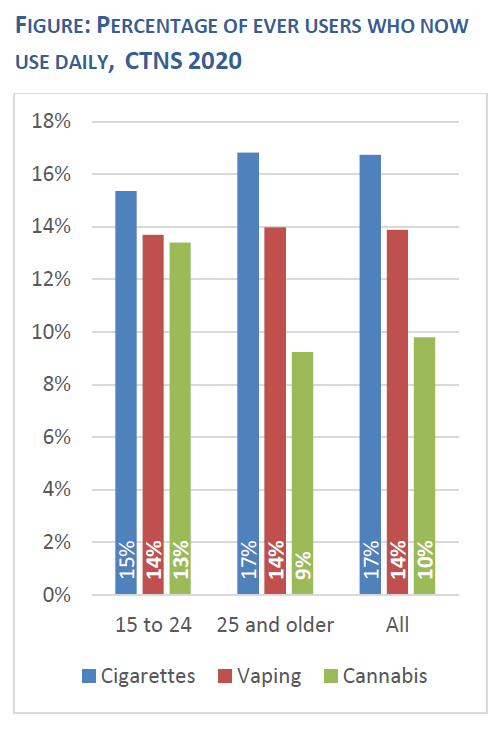 One indicator of becoming addicted to a substance is regular use. The CTNS explored the use of 3 inhalable drugs: vaping liquids, tobacco smoke and cannabis. For all three of these substances, between one-tenth and one-fifth of Canadians who reporting having used the drug even once in their lifetime were daily users at the time of the survey.

4. Four in 10 smokers made a quit attempt over the past year. One in 3 of those would-be quitters used a cessation aid.

Two-fifths (42%) of smokers and recent quitters said they had made a quit attempt in the year prior to being surveyed — and almost one-third (30%) tried two or more times.

The number of smokers who reported using a Quitline or Smokers Helpline or using a smart phone app was so small that the survey result is unreportable.

5. Most quit attempts were equally unsuccessful – no matter the quit method used.

Differences in the outcomes for those using different cessation approaches were not tested for statistical significance but are presented below. The largest number of successful quitters were those who identified as using no quit method.

6. Tobacco-flavour is the only vaping flavour not attracting young people or recreational users to vape.

The CTNS survey asked respondents who had vaped in the past month which flavours of vaping liquid they vaped most often. Eight options were offered: tobacco, fruit, candy, dessert, mint, or menthol, flavourless, and no usual flavour. Of these, only tobacco, mint, menthol and flavourless will be permitted by Health Canada’s proposed restrictions on vaping flavours.

Tobacco flavour is most often chosen by older Canadians and by thsoe who are using e-cigarettes to try to reduce or stop smoking. So few teenagers reported preferring tobacco flavour that the number is not reportable.

Of the eight options, three can be categorized as not being related to trying to reduce smoking. These were the reasons given by almost one-half (46%) of current vapers:

Four optional reasons were given that were related to reducing tobacco use, and these were chosen by two-fifths of smokers (43%) .

The eighth option was an unclassifiable “other” reason, chosen by one-tenth (11%) of vapers.

Tobacco flavour is most often chosen by older Canadians and by those who are using e-cigarettes to try to reduce or stop smoking. So few teenagers reported preferring tobacco flavour that the number is not reportable.