For the past several weeks, Imperial Tobacco has been ramping up its “Facts not Fear” campaign. 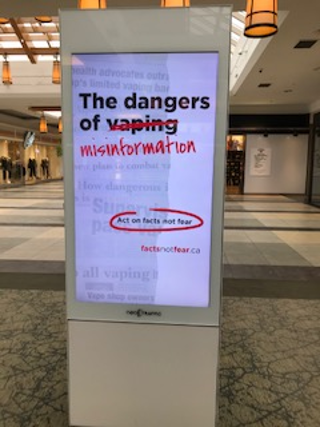 Their clear message — as shown in a display in a local Ottawa shopping mall — is that vaping products are not as harmful as health scientists are claiming.

Well, we’ve been down this road before. In the 1950s through 2000s, the same companies refused to acknowledge that cigarettes caused harm.

The century may have changed. The product may look different, but the marketing goal has not fundamentally altered for 50 years:  “Doubt is our product.”

Despite its familiarity, there are some surprising things about this campaign — such as the apparent absence of a government response.

In their rulings in favour of injured Quebec smokers, the Quebec Superior Court and the Quebec Court of Appeal ruled that campaigns aimed reducing concerns about the health effects from product use was a form of misleading advertising.

Consumer protection laws exist in each Canadian province — and also at the federal level. The Quebec rulings not only make it obvious that they should step in to protect the public from such misrepresentation, but also make it easy for them to do so. The relevant case-law has already been assembled and is ready to present to other courts.

Yet none of them have made public any concerns with Imperial Tobacco’s claim, although CBC news and others have reported that Health Canada and the Quebec health ministry were “investigating”.  (This week we sent a reminder to the federal Commissioner that action was needed).

2) Imperial Tobacco is currently in insolvency protection, with strict limits on what it can spend its money on. Oddly, the provinces have not used their influence to stop tobacco companies from advertising.

Following the Quebec rulings cited above, each of the 3 large tobacco companies sought protection under the federal Companies’ Creditors Arrangement Act (CCAA). This bought them some peace, as it suspended all of the provincial lawsuits they were fighting. But it also put them under strict conditions about how they could conduct their business during this period, with the provinces (as creditors) having significant say over the terms of their protective court order.

Yet none of the provinces has voiced objections about the firms being able to continue to advertise during this involvency period. There are a number of reasons why they might have been expected to object to the companies’ being allowed to continue run promotional and political advertising campaigns during the insolvency period:

On Thursday the immunity given to Imperial Tobacco by the CCAA “stay of proceedings” was extended until September 30th, 2020.