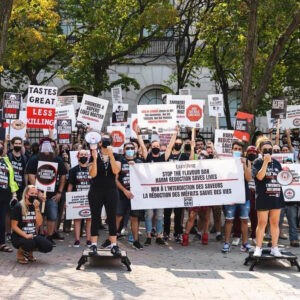 Almost 14 months have passed since Health Canada published draft regulations to restrict the flavourings and chemicals that could be used by e-liquid manufacturers. in vaping liquids. This post reports on developments in Canada and elsewhere that are related to restricting e-cigarette flavours. Links to more information are provided at the end of the post.

Lots of noise from the vaping industry

The proposal to limit e-cigarette manufacturers to two flavour categories (tobacco and mint/menthol) was met with significant opposition, much of it managed through campaigns funded by the nicotine industry.

It is difficult to speak with confidence about the future of these regulations, or the likelihood that they will become law in Canada in the near future.

Interpreting the pause in moving them forward is made more difficult by the many factors that may be influencing the process. These include the disruption to the decision-making process that naturally flowed from the federal election held in late September 2021. Although it returned the same party to power, the election nonetheless served to reboot the government process, interrupting progress on many files. It also triggered changes to some of the key decision-makers: a new minister was assigned to tobacco and vaping issues, which also let to a new team of political advisors on the file.

The election and its aftermath resulted in an evolution of government priorities. Those for the new Parliament were outlined in general terms in a Throne Speech and in more specific detail in the new mandate letters issued to cabinet ministers. Neither of these made any reference to vaping regulations. Nor was there a firm commitment to complete the regulation in the nuanced response of the government party to the election questionnaire circulated by the Heart and Stroke Foundation.

At a political level, the past year has been marked by silence on the topic. No ministerial Tweets. No speeches. No Parliamentary questions, answers or statements.The sole official mention to date is in the background information to a June 2022 news release, which noted that the department is still “reviewing feedback” on the flavour restriction proposal.

At the departmental level, planning documents suggest some wiggle-room was sought on this file. This year’s Departmental Plan, noted that there would be “ongoing work” on the regulations, but did not use the term “finalizing” as it did for some other regulations. Intention to regulate was also identified in the Forward Regulatory Plan published by the department in February but unlike other regulatory proposals, this one included no timeframe for the next step.

Forward movement in some jurisdictions …

In the year that Ottawa has been  ‘reviewing feedback’, other jurisdictions have moved forward to ban the sale of flavoured e-liquids.

One more province and one more territory have implemented bans on e-liquid flavourings other than tobacco. New Brunswick‘s restrictions came into force on September 1, 2021 and the Northwest Territories on March 25, 2022. Together with the three other jurisdictions which have adopted this measure (Nova Scotia, April 2020; Prince Edward Island, March 1, 2021, Nunavut, TBD), 5 of 13 provincial or territorial governments  have adopted this policy.

A year ago, only 3 European countries had banned flavourings: two banning all but tobacco (Finland, 2016; Hungary 2020), and one also permitting menthol (Estonia, 2019). Today, flavourings are prohibited in two more countries: on April 1, Denmark implemented its ban on all flavours other than tobacco and menthol and Lithuania‘s ban on all flavours but tobacco came into force on July 1, 2022.

Two additional European countries have set implementation dates for regulations: the Netherlands proposes to ban flavours as of January 2023, and last December the Ukraine passed a law to implement a flavour ban in July 2023.

The world’s two largest vaping markets clamp down on flavours

A year ago there was little indication that China was intending to clamp down on the e-cigarette market. In a sweeping set of reforms, that country has now imposed controls on this market which include a prohibition on all flavours other than tobacco flavour. These measures will come into force on October 1.

The United States Food and Drug Authority became responsible for regulating e-cigarettes in 2016, and was required by U.S. law to determine whether the marketing of each individual product was ‘appropriate for the protection of public health’. Last August, the FDA began to exert this authority, ordering 55,000 products removed from store shelves. To date, more than 250 manufacturers have been issued marketing denial orders (The FDA’s list can be downloaded here). Some flavoured products remain on the market, however, as legal challenges to the FDA’s decisions are being reviewed by courts.

Of those products that have received  marketing authorization from the FDA, the only flavour permitted has been tobacco-flavour. The FDA has deferred decisions on menthol-flavourings, but for products on which decisions have been made, no other flavours have received market authorization. The FDA recently explained its rationale: “For flavored ENDS (i.e., ENDS with e-liquid flavors other than tobacco or menthol, such as fruit), there is a known and substantial risk of youth initiation and use; accordingly, an applicant has a higher burden to establish that the likely benefits to adult smokers outweigh that risk. For tobacco-flavored ENDS the risk to youth is lower; accordingly, a lesser showing of benefit may suffice. Assessments for menthol flavored ENDS will be addressed separately. When it comes to evaluating the risks and benefits of a marketing authorization, the assessment for menthol ENDS, as compared to other flavored ENDS, raises unique considerations.”

This June, the Joint Committee on Health of Ireland’s Oireachtais recommended that the government’s proposed Tobacco and Nicotine Inhaling Products bill should be amended to ban flavours: “The Bill should regulate the flavouring of e-cigarettes and all flavours except for tobacco, should be strictly prohibited so as not to entice minors.”

In May, Hawaii‘s State Legislature passed legislation (HB1570) to ban all e-cigarette flavours. This would have made Hawaii the fifth U.S. state to do so (after New York, New Jersey, Massachusetts and Rhode Island), had not the bill been vetoed by the governor in mid-July.

…  moving backwards in others

Over the past year three legislatures have rejected or overturned proposals from health authorities to limit or ban the use of flavourings in e-cigarettes.

In March, the Swedish government introduced legislation (“Stricter rules for new nicotine products”) but the section which would have banned all flavours but tobacco was removed from the law during the review by the committee. The bill passed in June without this section.

The Icelandic legislative committee similarly removed language from the government’s proposal for regulatory authority to ban flavourings and the bill was passed in June without this authority.

More than half world’s citizens live in countries whose health authorities do not approve the sale of flavoured e-cigarettes.

The regulatory decisions by the Chinese government and the administrative actions of the U.S. Food and Drug Authority increases the proportion of the global population which lives in countries where flavoured e-cigarettes are not authorized for sale to over 20%. In addition, approximately 40% of the global population lives in countries where e-cigarettes cannot be sold at all as consumer products. 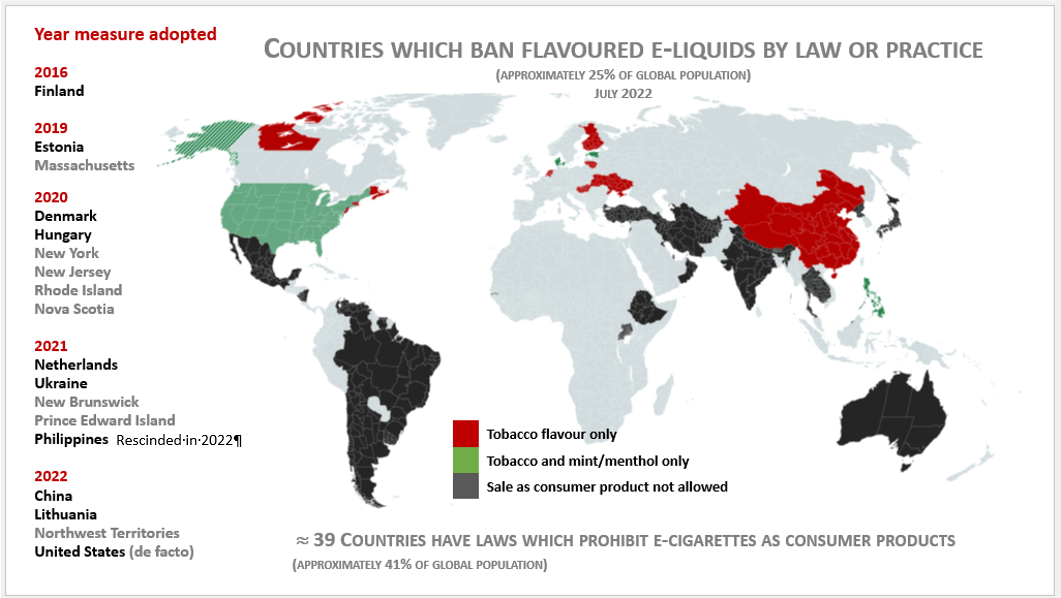 In all the jurisdictions where e-cigarettes are permitted for sale and where flavour bans has been formally discussed, major health organizations have taken the position that flavourings should restricted.