For more than 40 years, Canadian smokers have been encouraged to see “Weedless Wednesday” as an opportunity to make a quit attempt, as Canadian health systems use the week around it (National Non Smoking Week) to focus efforts on helping communities abandon tobacco use.

While in former decades this was a week of multiple announcements and media attention, more recently it has been observed without much policy or public attention, or even none at all.

On this Weedless Wednesday, Canadians are faced with two momentous tobacco control issues that merit public review. One of these – the youth vaping crisis – is on display in schoolyards, parents’ basements, and hockey team locker rooms. The other – the resolution of government lawsuits against tobacco companies – is hidden behind the closed doors of Bay Street law firms.

Putting the future of tobacco in Canada on the table. 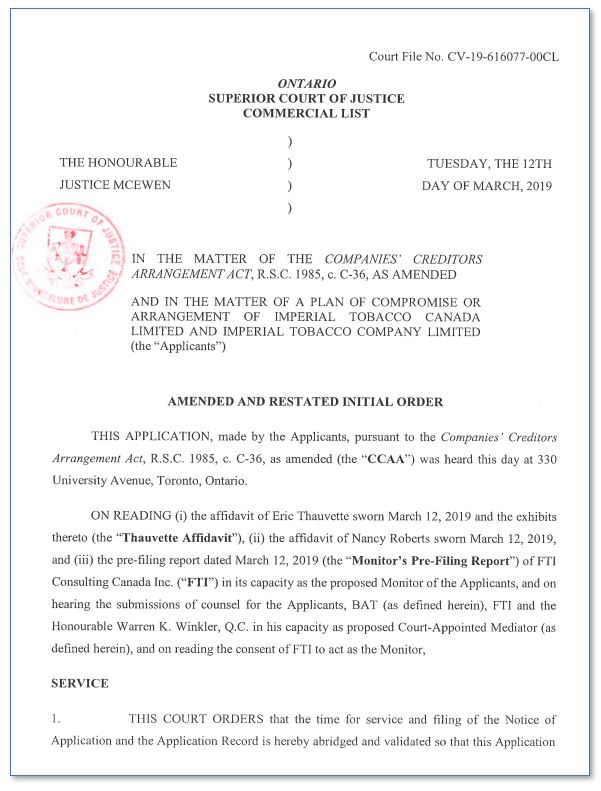 The Ontario Court Order that has suspended tobacco litigation in Canada

Ten months ago, the three large companies that dominate the Canadian tobacco market filed for insolvency protection, using their rights under the federal Companies’ Creditors Arrangement Act (CCAA). These are highly profitable companies which are wholly-owned subsidiaries of other highly profitable companies. Their annual earnings in Canada are around $2 billion. In short, these are the last companies you might expect to see claiming court protection from their creditors.

It was a unanimous, detailed, forceful articulation of the companies’ long-standing wrongdoing by the Quebec Court of Appeal last March that apparently triggered the companies to abandon their attempts to defend themselves in court against the lawsuits against them. The Quebec Courts had found them responsible to pay $13 billion in damages to 100,000 Quebecers whose serious lung illnesses could be traced to the companies’ illegal behaviour, especially their failure to warn, their misleading advertising and their deceptive public relations strategies. These same corporate actions were the basis of the billions of dollars (reportedly over $500 billion) in compensation the provincial governments were seeking as repayment for treating the diseases caused by the companies’ bad behaviour.

The courts granted the companies’ request for protection under the CCAA, suspended all of the lawsuits they were facing, and appointed a retired judge (Warren Winkler) to try to negotiate a settlement between the companies and all of those who might have claims against them. These claimants include the Quebec class action suits (the only lawsuits to go to trial), all 10 provinces, aggrieved farmers — as well as any other Canadian who has a claim. At the request of the companies, the process has been blanketed in secrecy.

The outcome of these negotiations – once approved by the court — is expected to provide a “global settlement” to all claims against the companies. It will draw a line under past wrongdoings and allow the companies to face the future without the legal baggage of their past.

Who gets to set the future course?

How to resolve the tobacco lawsuits is one of the most important public policy issues of this decade. Yet governments are not applying the standards of transparency and public consultation that are expected and routinely applied to much less significant issues. Not one of the provincial governments has yet consulted on how these cases should be resolved, and all of them have agreed to the secretive process initiated by the industry.

A problem that money can’t solve

When it comes to the big provincial claims, there is no money in the tobacco company bank. Anticipating lawsuits for decades, tobacco companies have studiously kept their cupboards bare. Instead of banking their profits, they routinely pass them on as dividends to shareholders who are sheltered by corporate law from any liability or claim.

In other words, any financial compensation will be the result of future tobacco sales. In order to repay Canadian governments and smokers for past wrongdoing, tobacco companies will have to sell cigarettes to future smokers (or smokers in other countries). Not only will this cause more disease and suffering, it will also drive up future health care costs.

It is hard to see such a scenario as anything but a kind of litigation Ponzi scheme, where harm is passed down the chain in order to make good to initial victims.

A problem with a meaningful solution

Governments can instead leverage the companies’ debt to them by imposing requirements that they wind down their Canadian business and agree to an orderly withdrawal (phase-out) of tobacco products. Like asbestos and leaded gasoline, cigarettes are a consumer product that should be relegated to history.

Rather than money, the main goals of provincial lawsuits against tobacco companies should be:

Last week, the man who led the first provincial lawsuit agreed. Former B.C. attorney general (and later federal Minister of Health) Ujjal Dosanjh told the Tyee “I believe tobacco is not something that is healthy at all and if we can put it out of business we should … I believe we should be leading the international effort to actually have it made illegal, have it banned across the world. What’s happening is that they were victimizing us and they still continue to victimize the poorer countries.”

The Tyee reports that mediation talks are taking place “this month” – perhaps even this week. These discussions will set the stage for tobacco control efforts for decades.

The insolvency orders which protect the companies will expire on March 12th 2020. On that date, a hearing will be held in Toronto regarding the future of the CCAA process. On that day it may become clear whether governments are using their negotiating power to keep people smoking for the following decades, or whether they are aiming to protect further generations from addiction, illness and death.

You can follow developments on the tobacco trials at: tobaccotrial.blogspot.ca