This week’s news that British American Tobacco (BAT) acquired a large share of Organigram, a Canadian cannabis company should have come as no surprise. Tobacco companies have recently signalled that they are very much getting into the cannabis business.

In an industry noted for expanding through mergers and acquisitions, we can only expect more such announcements. Indeed, BAT has set up its own venture capital arm to manage such investments — Btomorrow Ventures / Better Tomorrow Ventures. 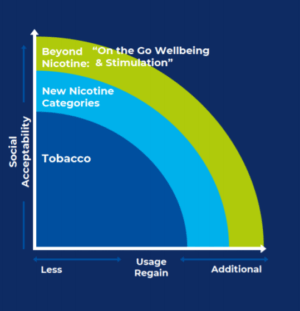 In yesterday’s press release revealing the Canadian deal, BAT reminded the business community of its plans to expand into new drug markets. As it has previously explained, vaping is key to restoring the size of its traditional customer base – but products like cannabis are the key to enlarging it.

‘Beyond nicotine’ is key to gaining even more customers.

The agreement between BAT and Organigram involves a trade of £126 million (Cdn $240 million) in return for one-fifth (19.9%) of Organigram’s shares, and a couple of seats at the board table. The companies will co-manage a ‘Centre of Excellence’ based in New Brunswick and work together to develop the “next generation of cannabis products”.

The imbalance of resources between sellers and regulators

This agreement exposes the imbalance between the deep pockets available to BAT and other tobacco companies to increase their market, and the small amount that is made available to governments to protect consumers from this marketing.

Relative to its overall operating costs, BAT’s investment in Organigram is small, but it nontheless dwarfs public investments in Canada to reduce the harms from tobacco or cannabis. Last year Health Canada spent ($35 million on tobacco control activities) and ($66 million on cannabis-related activities.)

The writing on the wall for a merged tobacco-cannabis market

The plans of BAT and Philip Morris International to become players in other drug market is captured on recent slide presentations made to investors. While BAT makes explicit that their focus is on cannabis, PMI speaks euphemistically about “botanicals”.

In February, BAT told investment analysts in New York that its new business lines (‘better tomorrow ventures’) would allow them to apply their distribution channels, their political influence, their ‘M&A’ ability to gobble up competitors and their ‘insights’ into human drug use.

The drug effects they were targetting (BAT slide 36 shown below) are “on the go wellbeing and stimulation”, “boost & energy”, “clarity and focus”, “calm and relax”. In this area of “high growth & margin categories” they see lots of money to be made! 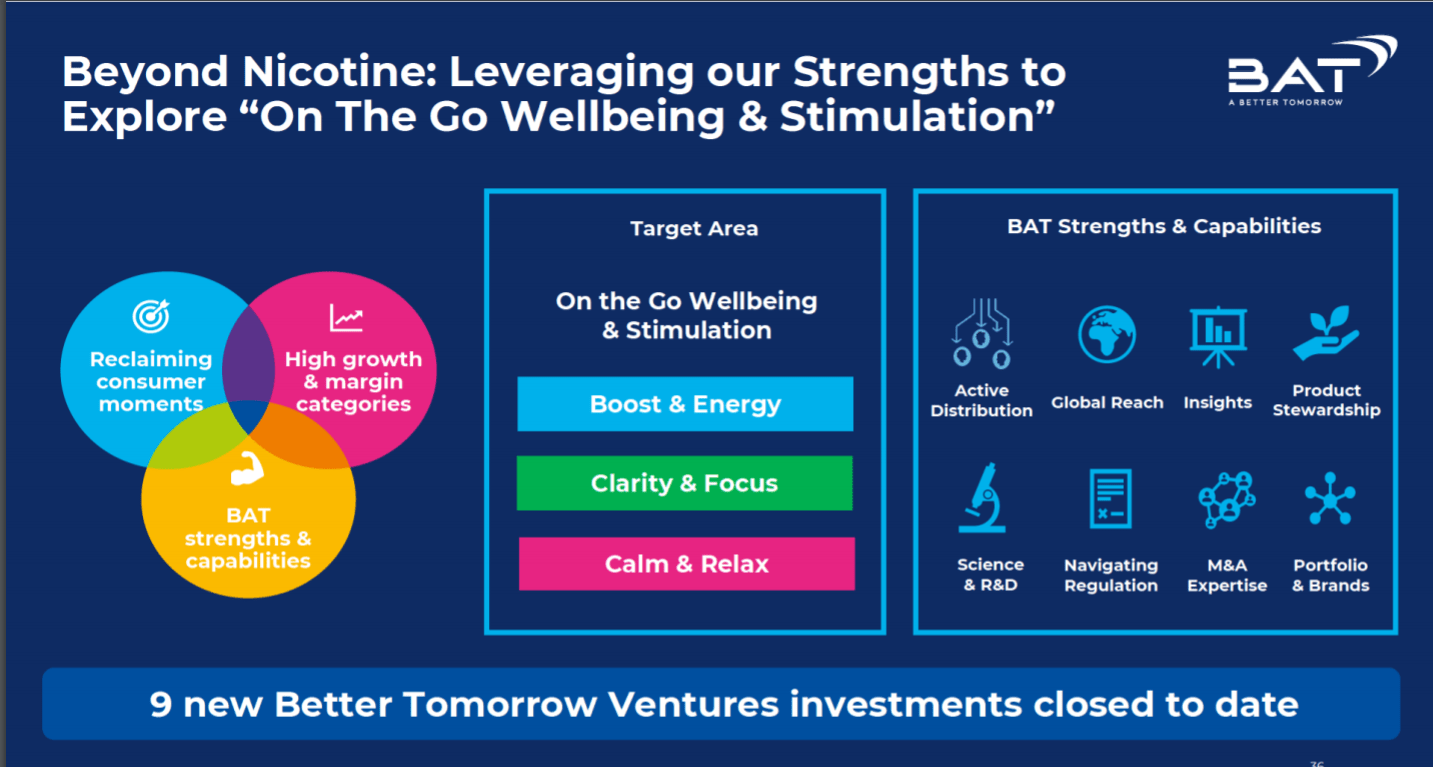 In the same week, PMI hosted an investor day, during which they explained why they were getting into the business of selling other drugs (“going beyond nicotine”).

Like BAT, PMI sees its experience in tobacco, its knowledge of inhaled drugs, its product distribution strengths and its marketing savvy – “ability to change consumer behaviour” – are assets that can be applied to such “new adjacent areas”. The company predicts that within four years that the market for these non-tobacco drug ‘botanicals’ will hit US $29 billion (Cdn $36 billion). (PMI Slide 34) 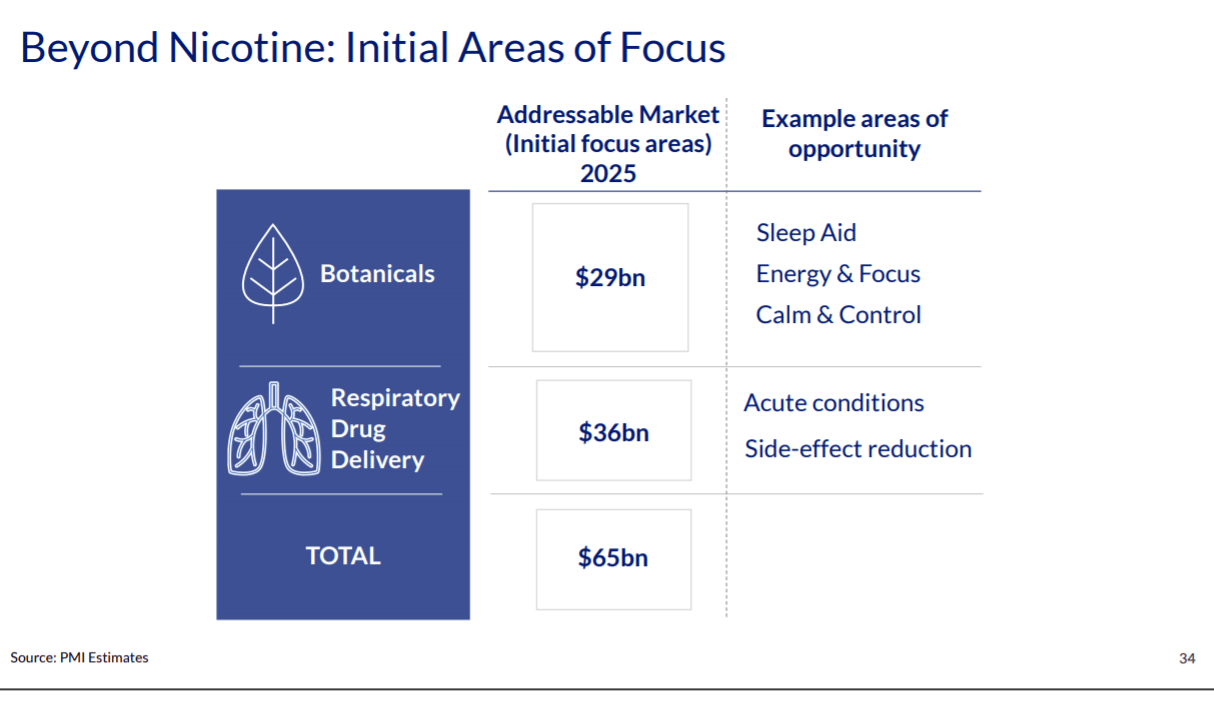 The regulatory response that is yet to be drafted

Canadian laws already provide some protection from tobacco companies fuelling a new wave of drug use. Provincial cannabis laws, for example, forbid cannabis and tobacco products from being sold in the same stores.

Federal cannabis and tobacco laws also impose some barriers: cross-branding of tobacco and vaping products is forbidden and vaping products can’t taste like cannabis. These federal laws were not drafted in anticipation of the the emerging realitiy of integrated suppliers targetting poly-user. There is currently no legal role for Canada to intervene in business deals like yesterday’s – no investment restrictions, no barriers to sharing of consumer research, co-marketing, or other accelerators of nicotine, cannabis and other drug sales.

The vulnerable consumer and the potential for market growth

Cannabis and tobacco suppliers compete largely in the same market and target largely the same people. Canadian researchers found that in 2013-2014, half of Canadians who have smoked cannabis more than once in the past year were also tobacco smokers, and that more than half of Canada’s 5.5 million smokers had used cannabis. [1] (They also found that the higher risk of smoking among cannabis users is considerably larger than for other risk factors, including education, income, race, gender, indigenous status, etc).

Canadian smokers and tokers often use both products together. University of Toronto researchers analyzed data from an Ontario health monitoring survey from 1996 to 2017. In 2017, 40% of Ontarians who used cannabis had mixed tobacco with it (although this percentage had declined over years). [2]

More evidence of the harms of cannabis

Recently-published research provides new reasons for Canadian regulators to respond forcefully to any development that increases the likelihood of smoking tobacco or cannabis. (Cannabis use in Canada is higher than in other comparable countries)

Historically, because cannabis use is so frequently associated with tobacco use, it has been hard to know what the risks of cannabis use are, as distinct from the risks of tobacco use. This has changed. American researchers, led by Siddarth Shah [3] succeeded is isolating the health consequences of cannabis use from those of tobacco by using data from the U.S. Behavioral Risk Factor Surveillance System. This is a nationally representative survey with a very large sample size, and by pooling data from three years they were able to have observations for 133,706 cannabis users who had never smoked tobacco cigarettes. They found that frequent cannabis smoking (10 or more days a month) was associated with an 88% increase in the risk of coronary artery disease and an 81% increase in the risk of stroke.

This finding should be of particular concern to frequent cannabis smokers, including those smoking cannabis for medical reasons. The perceived medical benefit of cannabis use may be offset by increased risks of coronary artery disease and stroke.