Next week Justice McEwan of Ontario’s Superior Court will be asked for the sixth time to extend the insolvency protection orders under which Canada’s 3 main tobacco companies are maintaining “business as usual” while trying to negotiate an end to the lawsuits filed against them.

In most respects, there appear to be no new developments in this story. For the past 24 months lawyers representing Quebec smokers (who have won a $14 billion award against the companies) and lawyers representing the ten Canadian provinces (whose claims for $500 billion have yet to be heard in court) have been told to stand down their legal actions.  (Background on these lawsuits can be found here)

The last day of the current ‘stay’ period expires on March 31st, and it looks like the companies’ request for an extension to September 30, 2021 is not being opposed.

As long as the companies are protected by these orders made under the authority of the Companies Creditors’ Arrangement Act (CCAA), the resolution of the governments’ lawsuits against tobacco companies will be developed in closed-door negotiations. Very little information has been made public about the discussions being mediated by former Justice Warren Winkler.

In contrast to this secretiveness, the CCAA process is providing transparency where usually there is none. One requirement of this system is that accounting firms are recruited to provide regular updates to the court on the financial situation of the insolvent companies. With the documents filed this week by Imperial Tobacco Canada (ITC), Rothmans, Benson and Hedges (RBH) and JTI-Macdonald  (JTIM) we now have around 24 months of financial reports for each of the companies. In the decades since these companies became wholly-owned subsidiaries of global firms, such information has generally not been available.

Another unusual aspect to the insolvency protection is that while the companies are able to continue “business as usual”, they are restricted in how they can use any of their operating profits. In this case, for example, they cannot send dividends or other payments to their multinational owners. The money is notionally set aside for distribution to their creditors — the people who are suing them.

The financial pictures provided in the monitors reports (links provided below) are presented somewhat differently than the financial statements typically seen in annual reports, and each company has chosen to provide different levels of details. JTI-Macdonald was the only one to identify its promotional expenditures, for example, only two of the companies revealed how much they paid for the main ingredient in their products (tobacco), and one company combined excise and income taxes in its report. The information tabled in these reports reflects cash flows, and is not adjusted for deferred revenues or accounts payable, as year-end statements usually are.

The table below summarizes the data for the two-year period spanning mid-March 2019 to mid-March 2021. 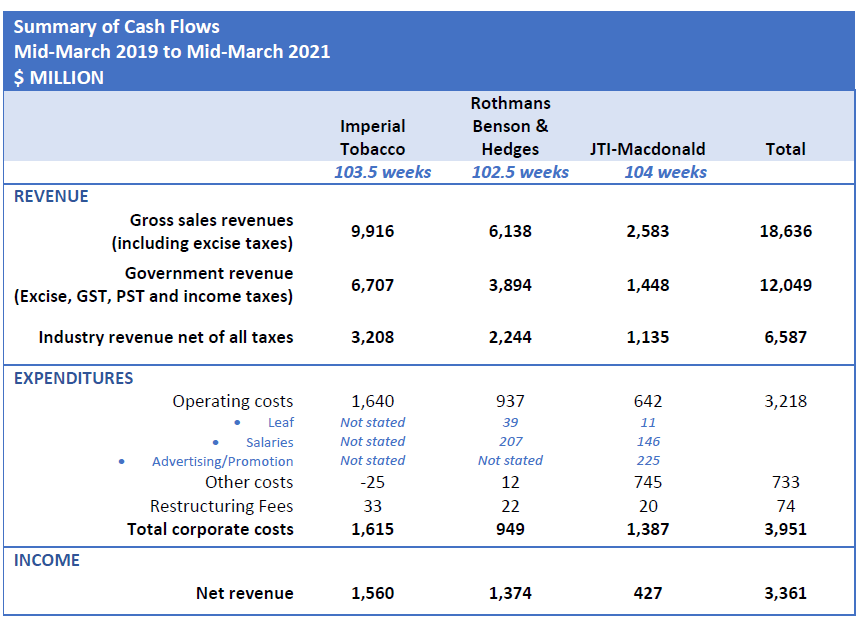 Even in insolvency, tobacco companies are enormously profitable. During this period the annual combined net (after tax) cash retained by the companies is about $1.7 billion dollars. This is about one-half of the $3.3 billion they collectively received through sales and other activities (after excise, sales and income taxes are discounted). If these are final numbers, this will give them net profit margin of about 50%.

These high earnings are still not enough to satisfy claims. At the beginning of the CCAA process, the companies declared that they had $2.5 billion between them as cash available to pay their creditors. Two years later, that amount has grown to $5.8 billion. This is only 1% of the amount that is being claimed against them.

Governments don’t need lawsuits to get money from smokers. During this period, Canadian smokers contributed more than $6 billion per year in tax revenues to governments through the companies. (This will include taxes received by the federal government, which is not involved in the lawsuits). Smokers remain the only source of revenue for any compensation paid by the companies in settling these lawsuits.

The cheapest component of cigarettes appears to be tobacco. Two of the companies, RBH and JTIM, provided information on how much they spent on the main ingredient in their products, tobacco: 4% and 2% of their operating costs respectively.

Even in a dark market, promotions are a major cost. Only one of the companies, JTIM, provided expenditures on advertising and promotion. In the two-year period it spent $225 million on promotions, or 35% of its operating costs (8% of its total costs, once its unusually high payments for trademark rights are included).  JTI is the only company which does not have a direct contracting system with retailers, so the incentive payments it makes to retailers are not integrated with its billings, as they are for other companies.

To put it into perspective …

The amount spent on tobacco products in Canada ($9 billion per year) is enough to pay for 20 Space Agencies or 4 Departments of the Environment.

Canada’s 4.7 million smokers each contributed about $2,000 per year to the tobacco market. About $340 of that was used to manufacture and distribute the cigarettes; governments received about $1,300 in taxes and tobacco companies cleared the remaining $360.

For every $1 in post-tax revenue, tobacco companies in Canada cleared 51 cents after costs.

During these two years, the companies spent more on “restructuring” costs to keep their companies alive than Health Canada spent on activities aimed at preventing deaths from tobacco. ($74 million vs. $68 million)