During last week’s investor day, British American Tobacco made public many of its estimates of legal and illegal tobacco sales around the world. Combined with official reports from countries which monitor sales (like Canada and France), and with estimates from BAT’s competitors, these help give us a picture of what is happening to the global tobacco market.

Simply put, the sale of cigarettes and cigarette substitutes (like roll-your-own) continues to decline. It declines in countries (like Canada, England and the United States) where e-cigarettes and other nicotine substitutes are avaialble. It declines in countries (like Australia and Uruguay) where they are banned. In Japan, where heat-not-burn cigarettes (HNB) have played a uniquely strong role in the decline of cigarette smoking and where vaping products are banned, the sale of HNB products is also on the downturn.

For public health, this is a cheery prospect, although the rate of decline is not yet big enough to break out the champagne. For shareholders, however, the prospect of persistently decreasing sales creates concerns for the long-term value of their investments. Not surprising, then, that BAT couched its news about increasingly steep falls in tobacco use with a promise to go after  “new generations” and “new consumers” for other nicotine products.

This post compiles data from BAT and other sources on tobacco sales in 2019.

Cigarette sales in Canada are down by 7.5% in the past year.

Cigarette companies (including GRE) are required to provide Health Canada with monthly wholesale data, including the number sold for each brand and the average monthly price in each province. In February, this data was shared: cigarette sales fell from 25.8 billion sticks in 2018 to 23.9 billion in 2019. This was a sharper decline than in previous years.

The unexpected size of the decrease had been signalled earlier in September by Imperial Tobacco, which told an ontario court that “The tobacco industry in Canada appears to be experiencing a higher than historic downward trend in the volume of cigarettes sold.”  In February, Philip Morris International also reported on the decline (which it measured at 7.7%), attributing it “to the impact of cumulative price increases, as well as the growing prevalence of e-vapor products.” 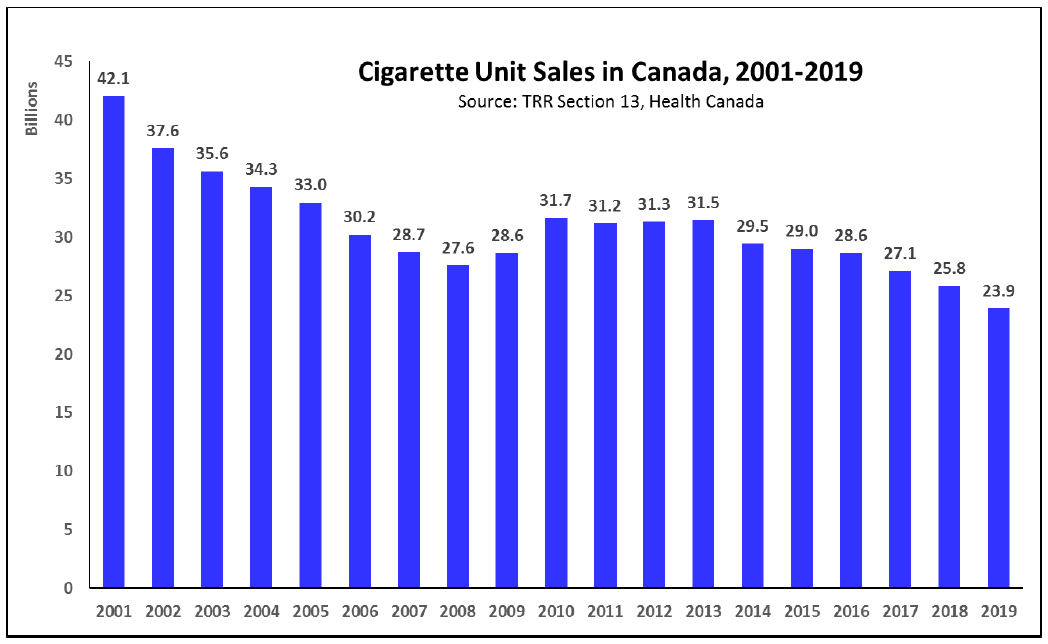 The decline in legal shipments was greater in some parts of Canada than in others — 3 times as much in Ontario as in Quebec. The difference in provinces may suggest the extent to which different factors – like increased contraband, lower smoking or more substitutions with vaping products –  are playing a role. Interprovincial comparison will be made easier once data on smoking prevalence for 2019 is made available with the release of the 2019 Canadian Community Health Survey and more information comes on line from the 2019 Canadian Tobacco and Nicotine Survey.

For several decades, national tobacco use has been viewed through the lense of a global epidemic, with differing market patterns as the epidemic takes hold and then as populations recover. Canada is among many countries which are considered to be in the “recovering” stage of this epidemic, as are Australia, France, the United Kingdom, the United States and others. Comparisons with such countries is useful to assess whether this year’s progress is much better than expected, or whether it is in line with the normal trajectory.

It would appear that other developed countries are experiencing steady and sizeable reductions in sales. Canada’s experience last year of a 7.5% reduction is about twice the global rate of decline — but not much different than that experience in Japan or Australia. As mentioned above, these countries have taken very different approaches with respect to tobacco control generally and the regulation of alternative nicotine products. 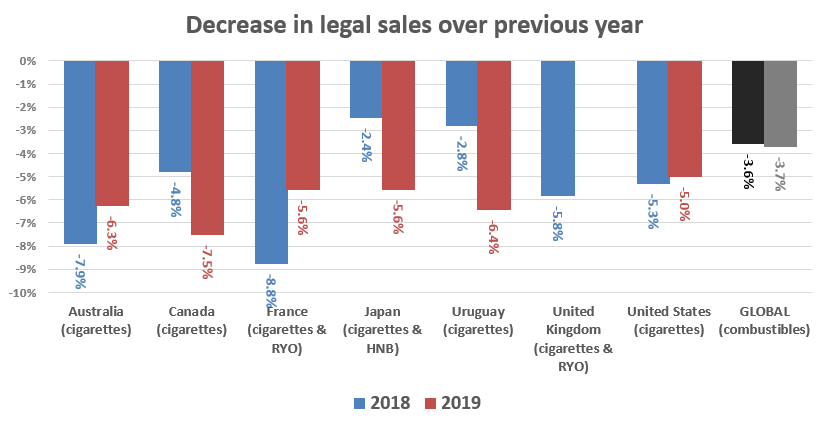 Data is messy and country-comparisons are difficult

The chart above is not useful for drawing conclusions about why cigarettes sales in any one country are falling faster or slower than in another. There are too many obvious issues that could be influencing the difference to link the difference to a particular policy decision or economic event. Illicit sales could be increasing or decreasing, the smoking populations could be at different ages (North American Baby Boomers are now reaching their mid-70s, when deaths from smoking are expected). Prices could be causing smokers to cut down, or alternative products could be substituting for some or all of a nicotine-users tobacco consumption.

Illicit sales are said to account for some — but only a little — of the global decrease in consumption.

BAT helpfully presented its estimates of the volume of illegal sales over the same period, and the way in which these would have influenced legal consumption. The company estimates that the illicit market has grown from 10% of total sales in 2017 to 13% last year. If illicit sales are considered, then global consumption fell by 2.1% last year. 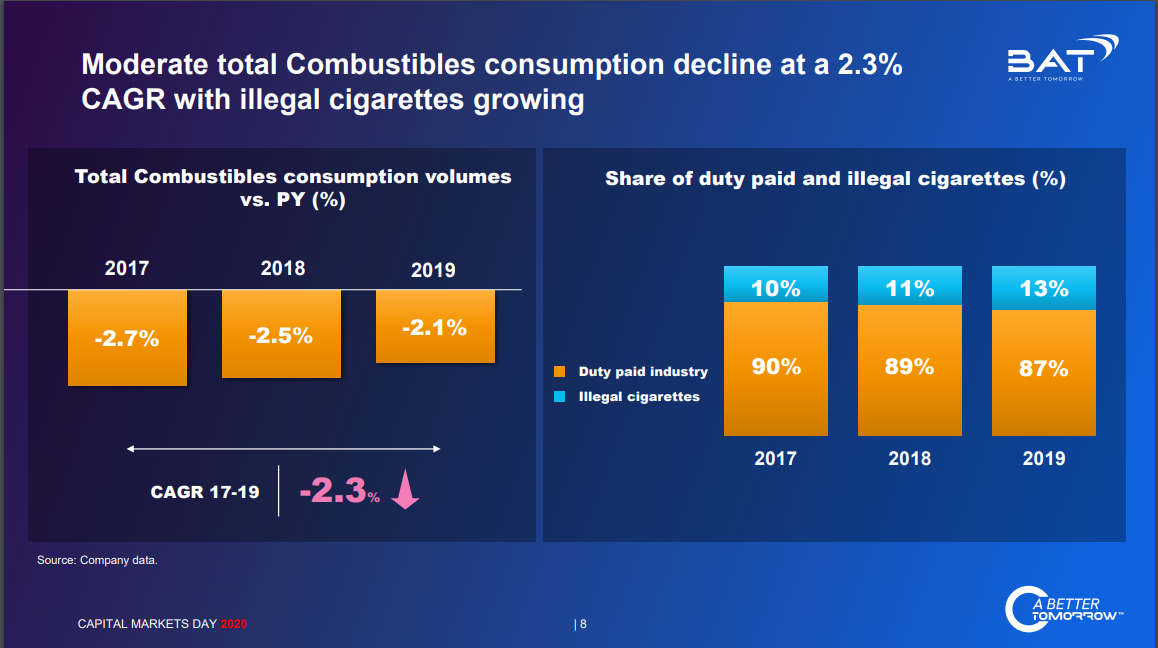 Much of the heavy lifting has already been done in comparing historic cigarette consumption trends. Stephen Hoffman and colleagues at the Toronto-based global strategy lab compiled estimates for 40+ years, ending in 2015, and have made the dataset available for use.

The institute for Health metrics and Evaluation has also turned its head to this problem — it’s data has been made conveniently visualizable at Ourworldindata.org

The problem, always, is keeping these large and carefully constructed data sets up to date. Business intelligence, like that offered from Health Canada’s reports and by British American Tobacco and Philip Morris International to their investors is a useful stopgap.