Over the past six months, new restrictions on vaping product marketed have been implemented by the federal and provincial governments which share responsibility for public health. This post provides an update on some of these measures – and on the reasons they are needed.

In the 2020 Annual Report it published this week, British American Tobacco provided validation for these regulations — and the need for more. (The Canadian vaping market is one where half of vapers are under 25 years of age and 4 in 10 have never once smoked a cigarette.) 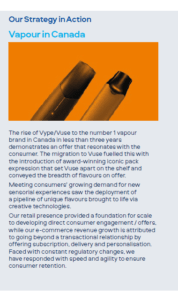 In Canada, BAT says the formula for its success is fancy packages, flavour innovations and on-line marketing that engages consumers. It also underscores that its goal for these products is “consumer retention”. It makes no mention of smoking cessation, although it does identify addressing the market for recreational drug use (“sensorial experiences”):

“The rise of Vype/Vuse to the number 1 vapour brand in Canada in less than three years demonstrates an offer that resonates with the consumer. The migration to Vuse fuelled this with the introduction of award-winning iconic pack expression that set Vuse apart on the shelf and conveyed the breadth of flavours on offer.

Meeting consumers’ growing demand for new sensorial experiences saw the deployment of a pipeline of unique flavours brought to life via creative technologies.

Our retail presence provided a foundation for scale to developing direct consumer engagement/offers while our e-commerce revenue growth is attributed to going beyond a transactional relationship by offering subscription, delivery and personalisation. Faced with constant regulatory changes, we have responded with speed and agility to ensure consumer retention.” 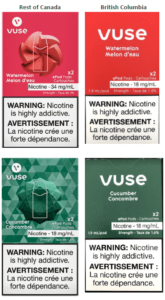 * In February, Health Canada shared its plans to introduce regulations later this year on restrictions on vaping flavours and reporting requirements on vaping product suppliers. It also indicated that next year it would be proposing restrictions on package and design features. Its consultation period on a proposed 20 mg/ml cap on nicotine ended last week.

* In December, the Quebec minister of health indicated that this province too would be restricting nicotine and would ban flavoured products. These measures were among those recommended by a panel of experts that had been commissioned earlier in the year.

* In October, Nunavut introduced legislation that would ban flavours and impose other restrictions. The legislation has received second reading.

* In September, B.C.’s restrictions on nicotine concentration and limitation of flavours to age-restricted specialty stores came into effect. On that date, the province also required vaping produts to be sold in plain-ish packaging (using only text and images permitted by regulation). Israel is the only jurisdiction to date to require plain packaging of vaping products.

* In September, Health Canada’s restrictions on promotions came into effect. The regulations ban promotions “done in a manner that allows the advertising to be seen or heard by young persons.”