Earlier this summer, Statistics Canada released data files for the 2017-2018 Canadian Community Health Survey. This post is one of an occasional series which reviews this data for information on smoking patterns in Canada. Today’s post is the first to look at the relationship between income and smoking behaviour.

In recent decades the relationship between economic disadvantage and smoking has been well established. A clear demonstration of this is in the smoking rates of each household income quintile (one-fifth of households). Those in the poorest households are 1.8 times as likely to smoke as those in the wealthiest: only 12% of Canadians in the highest group say they smoke cigarettes compared with 22% in the poorest.

Although smoking rates have fallen in all household income groups, the differences among them have not.

This is not because poorer Canadians are more likely to experiment with or become smokers. Canadians in all income levels are generally equally likely to have never smoked.

Most smokers live in households with incomes over $60,000.

Although smoking rates are higher among poorer Canadians, it is not true that most smokers are poor.

Statistics Canada provides information on household income brackets in increments of $20,000, with the highest category being “$80,000 or more”. More than half (55%) of Canadian smokers live in families with household income over $60,000.

One signal that families are in economic distress is when they experience difficulties in obtaining enough food. Most Canadians (87%) do not live in families experiencing food insecurity, but 1 in 5 daily smokers (19%) do.

The CCHS indicates when families have some difficulties accessing food (‘marginal’), when they sometimes compromise quality or quantity of food consumed (‘moderate’) and when they have not had enough to eat regularly (‘severe’). One third of the 2.5 million Canadians who live with moderate or severe food insecurity are smokers.

Canadians living on social assistance are much more likely to smoke. The large majority of smokers are in the workforce.

In 2017-2018, the CCHS identified that the main source of income for three-quarters of survey participants (76%), were wages and earnings; that 15% relied on retirement benefits and that fewer than one in five (3%) were dependent on social assistance payments like employment insurance, welfare or workers compensation. Smoking rates in that last category were more than double those of the general population (38% vs 16%). Almost one in ten (8%) of smokers are in receipt of social assistance. 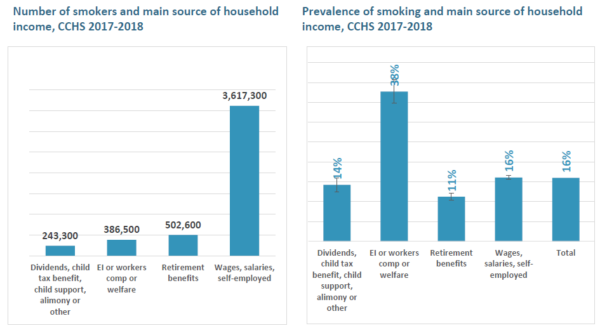 The Canadian Community Health Survey is an annual survey conducted by Statistics Canada. Every two years, the Public Use Micro File is made available with information on the health behaviours and status of about 100,000 Canadians over the age of 12.