This post reports on our recent review of BAT’s vapour product offerings  in the 18 other countries.in which it operates a country-specific web-site.

Last week Imperial Tobacco Canada (BAT) sent an e-mail informing its Canadian clients that it was withdrawing the ePEN device and that the EPOD was their only remaining vaping product in this country. 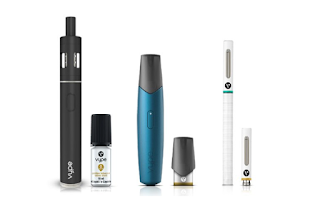 Over the past 31 months, BAT has introduced 4 vaping products into Canada and has withdrawn 3 – the eStick, the eTank and the ePen.

The devices they pulled from the market are those which were designed to use lower-concentration nicotine liquids.

The device they continue to sell is the one designed to be used with higher-nicotine (salted) liquids, which was introduced by BAT in January 2019 as a competitor to JUUL.

This device, notably, is reported by BAT to now be the market leader, with 40% market share by value.

BAT has not withdrawn the lower-nicotine pod devices from most other markets (other than Kuwait). Although the e-Tank has generally been withdrawn, there are few signs that BAT is replacing the ePEN with teh ePOD in many othe rmarkets — and only the lower-nicotine ePEN is offered for sale in Latin America and Italy. 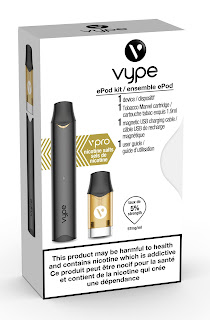 The ePOD was introduced in Canada in January 2019.

As we reported earlier, over the past year BAT has further globalized its vaping products, and sells the same product lines through near-identical web-sites in North America, Europe, Latin America, the Middle East and New Zealand. We conducted an inventory of the products offered for sale through global sites in January 2020 and again this month.

In one year, BAT has nearly tripled the number of ePOD flavours in Canada

Over the past year, BAT has more than doubled the number of flavours offered in Canada for its ePOD device. In January 2020, there were only 8 flavours offered, and a year later the number had grown to 22. The range of tobacco flavours has increased from 1 to 4 (Golden Tobacco, Aromatic Tobacco, Smooth Tobacco, Rich Tobacco); mint and cooling flavours has increased from 1 to 3 (Smooth Mint, Cool Peppermint, Polar Mint); fruit flavours have increased from 5 to 12 (Watermelon, Cucumber, Berry, Lemon Berry, Passionfruit, Blueberry, Peach, Mango, Blood Orange, Strawberry, Lychee and Pinapple Melon), and from 1 to 3 other flavours (Flavourless, Vanilla and Citrus Gin). 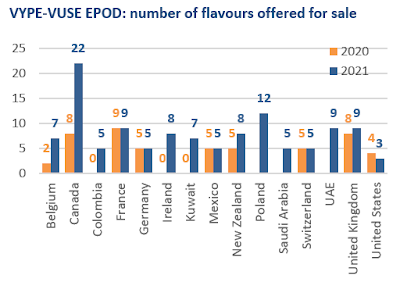 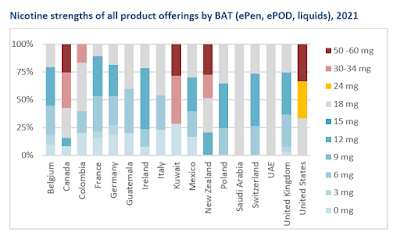 The European Union restricts the amount of nicotine that can be sold in vaping liquids to 20 mg/ml (a regulation that Health Canada is also proposing). But in Europe, the majority of products offered for sale by BAT fall well under that maximum. Of all the vaping liquid options they sell in the United Kingdom, for example, three-quarters (75%) are for liquids with less than 18 mg/ml of nicotine. The situation is similar in France (89%), Belgium (75%), Germany (82%), etc.

In Canada the situation is reversed. Only 15% of BAT’s vaping liquids offered for sale have nicotine levels lower than 18 mg/ml. After the withdrawal of the ePEN liquids, that percentage will drop to 3%. The only other countries demonstrating a predominance of high-nicotine are Kuwait, New Zealand and the United States.

The law of supply and demand

Regulatory differences, like maximum nicotine levels, explain some of the differences in BAT’s market offerings between countries. But there are other differences that may drive different patterns of use and sale.

In Canada, the vaping market is one where half the customers are teenagers and young adults, half are using vaping products as a form of recreational drug (not as a way to quit smoking) and 40% are never smokers. (Statistics Canada CTNS, 2019). In the United Kingdom, by contrast, the vaping market is one that largely serves older customers who are former smokers – only 4% are never smokers. (UK Office of National Statistics, 2019).