The new year is a common date for governments to peg for implementing regulations or new rules. This year is no exception, with new tobacco control provisions kicking in this week. Other regular New Year’s changes will be price increases set by tobacco companies. This post reviews these events — with related and updated fact sheets linked at the end.

Some grace periods come to an end, some are beginning

(Another COVID-related grace period underway is the federal requirement for plain packaging of cigars, which was originally scheduled for November 2020. This fall suppliers were told they would have an additional year to comply.)

Newfoundland and Labrador’s new 20% tax on vaping products comes into force this week. A licensing system has been concurrently implemented, making Newfoundland the 4th Canadian province to require vaping retailers to be licensed by provincial authorities.

Newfoundland is the 4th province to put higher taxes on vaping products than on other consumer goods, and based on current prices is the province with the second-highest tax rate. 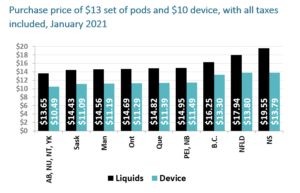 In all provinces, the federal Goods and Services Tax (GST) is applied, sometimes blended with provincial taxes as the Harmonized Sales Tax (HST). Some other provinces impose a provincial sales tax (PST). B.C. has increased the PST for vaping products to 20%, but Newfoundland and Labrador has imposed a new 20% ad valorem tax to both devices and liquids, to which the HST is also applied. Nova Scotia imposes a specific tax of $0.50/ml on liquids and a 20% ad valorem tax on devices, with an additional 15 HST on both.

A small tobacco tax increase in a small jurisdiction

Tobacco taxes went up by $2.00 per carton ($0.20 per package) in the Yukon today, based on an inflationary mechanism introduced in its 2017 budget. Nova Scotia continues to be the province with the highest cigarette taxes in Canada — with Quebec and Ontario lagging considerably behind.

And the usual new-year price increase on cigarettes

In December two of the three tobacco companies informed retailers that they would be raising the price of a carton of cigarettes by $2.50 to $4.00 per carton, depending on the brand. The new-year price increase is a well-established commercial practice, and the third company usually adjusts its prices in the subsequent weeks.

In the meantime, the wholesale price of both premium (eg du Maurier and Benson and Hedges) and discount (eg Pall Mall and Next) brands have increased by much more. Something to remember the next time that the industry protests that tax-driven price increases lead to contraband!

What they say and what they do.

We estimate that Imperial Tobacco has raised the price of a package of its cigarettes by 5% to 10% (depending on the brand) since the COVID-19 pandemic started. Yet in its pre-budgetary submission to parliament, it encourages tax authorities to see that with “record unemployment and households struggling to meet their financial obligations. This is not the time to impose additional costs on the population, such as tax increases, or on the industry, which would get passed on to consumers through higher prices.”

Interestingly, in its pre-budget submission, JUUL called for a volume-based tax on vaping products to be applied at the wholesale level. Doing so, it said will “increase the cost, reduce underage access to Vaping Products while providing the Federal Government with additional resources for enforcement and public education.”