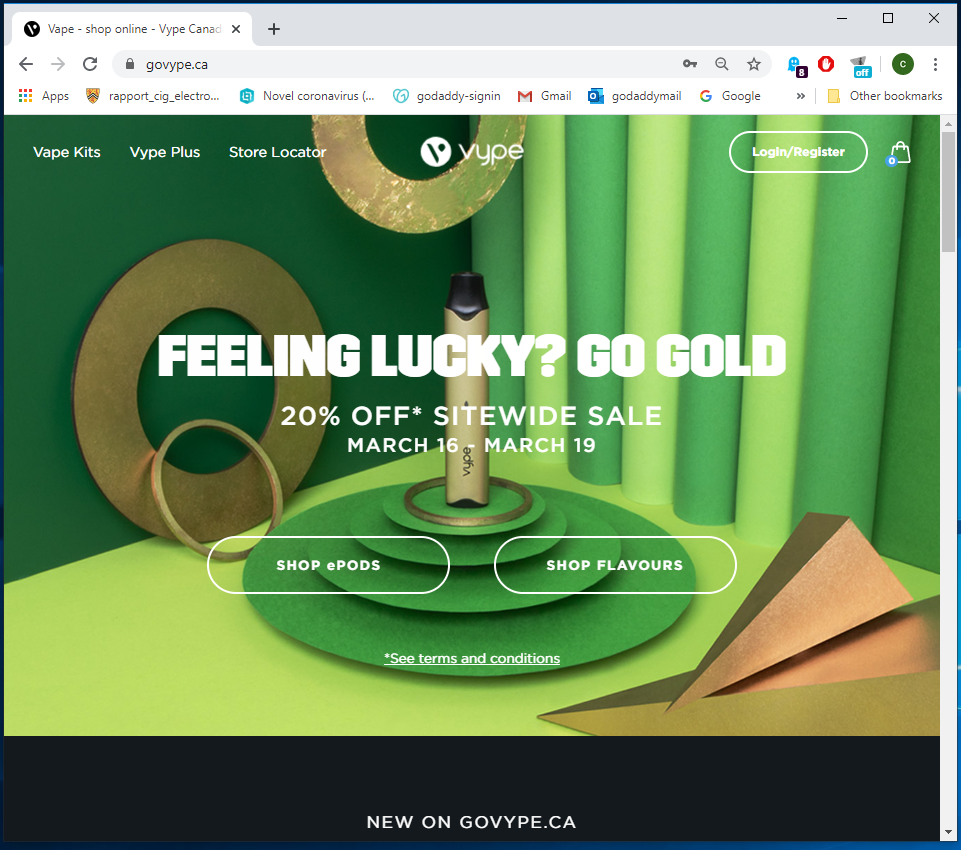 It’s St. Patrick’s Day today — and so this week Imperial Tobacco Canada has dressed its Vype promotions in green.

“Feeling lucky?” it asks visitors to its web-site before inviting them to “Go gold.”

Only a month ago — on Valentine’s day — the ads were similarly dressed for the day. Looking for romance? “Find an e-pod you’ll love”.

One might have hoped that the existing federal law would have discouraged this company from using these feast days to promote nicotine products.

After all, the Tobacco and Vaping Products Act (TVPA) bans ads which evoke “a way of life such as one that includes glamour, recreation, excitement, vitality, risk or daring.”

Advertisements which link products to deeply-embedded cultural events do both. By linking these products with these much celebrated feast days, they imbue nicotine with the deeply embedded values of the day –  like Irishness, luck or romance. Such associations function as lifestyle promotions. 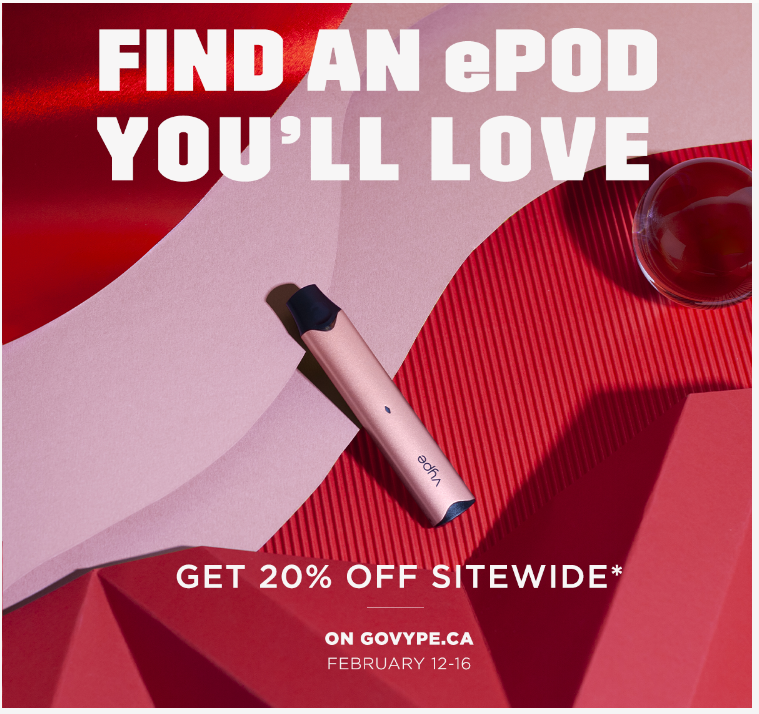 The general impression of no harm and misleading advertising

The TVPA, like other consumer protection laws, prohibits ads which “are likely to create an erroneous impression about, the characteristics, health effects or health hazards of the vaping product or its emissions.”

With their theme of feast-day celebrations and their sub-message of elegance and romance, these messages are like those which were condemned by the Quebec courts as giving the general impression that the product is not harmful to health and therefore being misleading advertising. (See para 518-541 of Justice Riordan’s 2015 ruling.)

A change of style, but not of impact

Over the past year, Imperial Tobacco has modified the style of its direct advertising, but it has not changed its power or purpose. The Father’s day ad from 2018, for example, shows more conventional symbols of lifestyle imagery, but it did not necessarily communicate lifestyle values more effectively.

In December 2019, Health Canada proposed to strengthen the TVPA with regulations to restrict permitted advertising. These important adjustments to the law would require ads like the St. Patricks’ Day and Valentine’s Day ads to carry warnings, but would not otherwise impose new restrictions on the styles of ads that are allowed. Unlike tobacco advertising, which is restricted to ‘informational’ messaging, vaping manufacturers will continue to be able to use non-product attributes in their ads.

Imperial Tobacco responds to concerns about flavours by adding more.

Many health organizations have called for restrictions on the use of flavours in vaping products. In January, Canada’s chief medical officers of health called on the federal government to “Ban all flavoured vaping products and then provide regulatory exemptions or market authorizations for a minimum set of flavours to support smokers who choose to use vaping to end or reduce their use of nicotine-containing products.”

Imperial Tobacco has responded to concerns about flavours not by reducing the number of flavour they offer, but by increasing them. Since the MOH call for restrictions, the company has introduced 4 additional flavours – Infused Cucumber and Blood Orange (January) and Passionfruit Fields and Lychee Orchard (March). 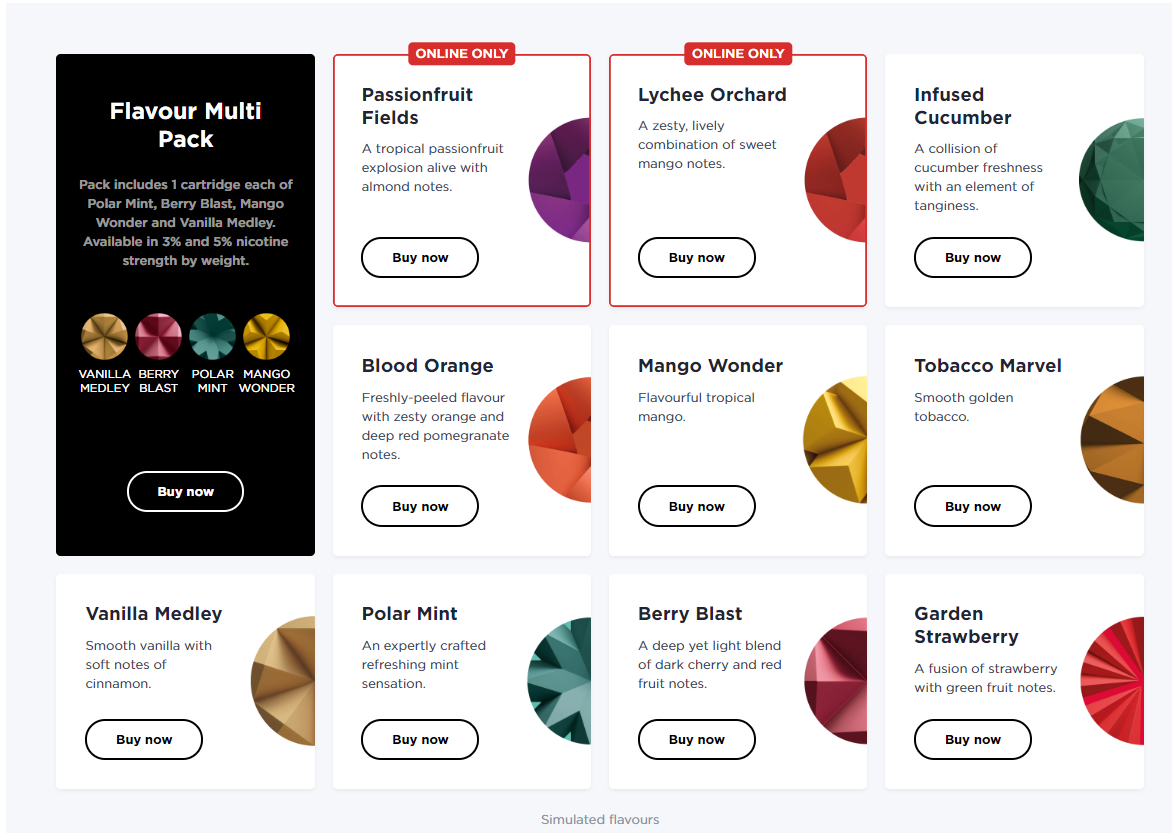 How low will prices go?

The Vype ePOD was introduced a year ago with a starter kit price tag of $44.95. Today Imperial Tobacco is selling it for $9.99. (The other major competitors, JUUL and Logic Compact, are also selling their products at less than half the January 2019 price.)

To date, Canadian tobacco control laws have focussed less on the pricing component of the marketing mix, using taxes instead as a way of establishing a minimum price.

The 20% tax on devices that is now in place in B.C. and that is planned by Nova Scotia and Alberta would raise prices somewhat, but would not prevent the companies from using lost-leaders or price promotions to attract new users.

Evocative ads. New flavours. Lower prices.  In the face of concerns about vaping, Imperial Tobacco is ramping up its marketing efforts.