This post reports on efforts by Canadian governments to ensure that retailers of vaping products follow provincial and federal laws, and identifies where official and community reports on enforcement action can be found.

Since 2019, Health Canada has proactively disclosed reports on its activities to ensure compliance and enforcement of the federal Tobacco and Vaping Products Act and the Consumer Product Safety Act. These reports are made available on Health Canada’s website.

Low compliance with federal law has been identified by non-governmental bodies in the health and industry sectors. In the summer of 2021, our agency found that vaping industry leaders were frequently non-compliant. The Vaping Industry Trade Association (representing large manufacturers) has issued its own guidelines for compliance, and also commissioned a review of the sales practices of a sample of on-line stores. In this review, 93% of the internet stores inspected were found to contravene federal prohibitions on certain flavours, and that fewer than half posted the mandatory health warning.

There are indications retailers who receive warning letters nonetheless fail to align their business practices with federal law. This month we reviewed the Instagram accounts of the 161 businesses that had received warning letters from Health Canada inspectors. We found that 72 (45%) continued to display testimonial-endorsements or promote prohibited flavours, some of which are shown here. Other infractions, such as the absence of health warnings, the use of lifestyle imagery and youth access to the marketing were observed in many cases. 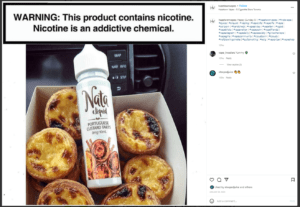 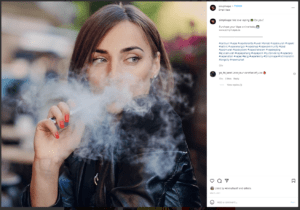 “If compliance cannot be achieved, subsequent enforcement actions are pursued depending on a range of factors, including but not limited to:
• severity/impact of the alleged non-compliance;
• continuation or the probability of reoccurrence of the non-compliance;
• compliance history of the establishment;
• program priorities and available resources. “

The following governments have made public certain enforcement activities related to vaping retailing.

Prince Edward Island engaged a dedicated tobacco enforcement officer in 2019, following concerns that inadequate enforcement was leading to increased infractions (with 20% of retailers willing to sell to an underage test shopper).  Nine months after PEI’s restrictions on flavoured vaping liquids came into force (in March 2021), three retailers had been taken to court, and charges had been laid against an additional retailer. Outcomes of enforcement activities are not proactively disclosed on the provincial web-site, but are communicated to the media. (This is a significant change from  past years, when PEI was reluctant to disclose the name of offending retailers.)

In December, 2021, the Nova Scotia government made public that on 29 occasions during the year its enforcement officials had seized vaping products which contravened provincial law because they were flavoured or had excessive amounts of nicotine. The retail value of the products seized was $605,000. In November, charges were laid against one of the suppliers (Vaporhub), with a hearing scheduled this month. Nova Scotia charges against individual sellers have also been made public last October.

Every five years, the Quebec government reports on its experience in administering its tobacco laws. The most recent of these is dated November 2020. In the preceding five-year period, the Quebec government found that compliance had grown, but that half of vape stores were non-compliant in their most recent inspections. Compliance rates grew from 27% in 2015-2016 to 51% in 2019-2020. Compliance was higher with respect to sales for minors (90% of stores passed inspection).

Routine disclosure of tobacco-related enforcement by federal and provincial governments

Health Canada previously made public annual reports on its compliance activities, but the most recent of these dates from activities now 5 years old (for 2016-2017). In that year the department conducted 6,792 retail inspections, reviewed the adequacy of more than 1,000 regulatory submissions  and analyzed samples of tobacco products. One in ten (11%) of retailers were found to be non-compliant with respect to labelling, promotion or other marketing practices, and one in 10 (11%) of manufacturers did not fully comply with reporting requirements. No charges were laid, and the most recent prosecution identifeid dated from 2006.

Newfoundland’s tobacco law is enforced by Digital Government and Service NL. Compliance reports do not appear to be made public.

New Brunswick’s tobacco laws are inspected by the Inspection and Enforcement Branch of the Department of Justice and Public Safety, with some information provided in the department’s annual reports. From this we know that the number of inspections has fallen considerably, but not whether compliance has improved.

The Ontario government delegates responsibility for inspection to local boards of health, and has established a guideline and protocol that requires annual inspections of each retail location. Under this protocol, boards of health are required to “publicly disclose a summary report of all retailer/owner convictions”. The City of Toronto, for example, provides monthly updates on convictions, and Peel Region provides an ongoing list of retailers who have been found to be selling to youth.

The Quebec government report cited above provides the most extensive detail on tobacco and vaping-related compliance and enforcement activities by any Canadian government. Over a 5 year period the department conducted 32,949 inspections, observing non-compliance on 12,307 occasions (37%). Of the 10,617 charges that were laid as a result, 88% resulted in a guilty plea or verdict. The report also provides information on the inspection results for different aspects of the law.  Overall, slightly more than half (57%) of tobacco retailers were found compliant with respect to signage and displays, and 93% had refused to sell to a minor when tested.

In December 2021, Saskatchewan’s Auditor General raised concerns about enforcement of that province’s tobacco and vaping laws. The departmental audit found that one-fifth (19%) of identified retail locations were not inspected, and that many retailers were not tracked at all. The AG noted that there were repeated offenses but that they “found no cases where the Ministry took retailers to court.”

As part of its overhaul of tobacco legislation, the Alberta government is establishing a new enforcement procedure and team. Enforcement responsibilities had previously been unassigned.  This past summer the province reported that “the enforcement team is expected to be operational in the second half of 2021.”

The British Columbia government delegates responsibility for enforcement of its tobacco- and vaping-related laws to local health authorities. On its web-site, the province provides some information on enforcement results and practices (including its Compliance and Enforcement Policy Manual. Some tribunal results are also posted.