In this statement the Ministers introduced a two new elements to the federal plan: the intention to follow a “people-centred approach” and an adjustment to priority populations to include  “those suffering with mood or anxiety disorders, as well as people living in poverty.”

This post looks at the higher -prevalence populations identified by Health Canada in recent years and how reducing smoking in these groups will contribute to achieving lower overall smoking.

Health Canada’s focus on higher-smoking populations continues to evolve. When Canada’s Tobacco Strategy was announced in May 2018) the communities of concern identified were Indigenous peoples, LGBTQ+ persons, young adult males and workers in certain industries. Later departmental communications dropped workers from the group and listed only “LGBTQ+, young adults and Indigenous Peoples”. Last week the Ministers statement made no reference to young adults, when adding mental health and poverty to the list of priority concerns.

It is possible to estimate number of Canadians who are included in this new focus using data from Statistics Canada’s Canadian Community Health Survey, for which the most recently-available public file is for 2017-2018. One of the limitations to this survey is that it does not include people who live on Reserves or aboriginal settlements, where about one-half of Indigenous Canadians reside.)

The data discussed below is presented on a downloadable data sheet.

Most Canadian smokers (81%) would be included in one of the groups identified by Health Canada since 2018.

The prevalence gaps and the benefits of closing them

All of the sub-populations identified as targets by Health Canada since 2018 have considerably higher rates of tobacco use than do their counterparts — Indigenous Canadians are twice as likely to be smokers as non-Indigenous Canadians, and those with mental health issues are similarly at double the risk. 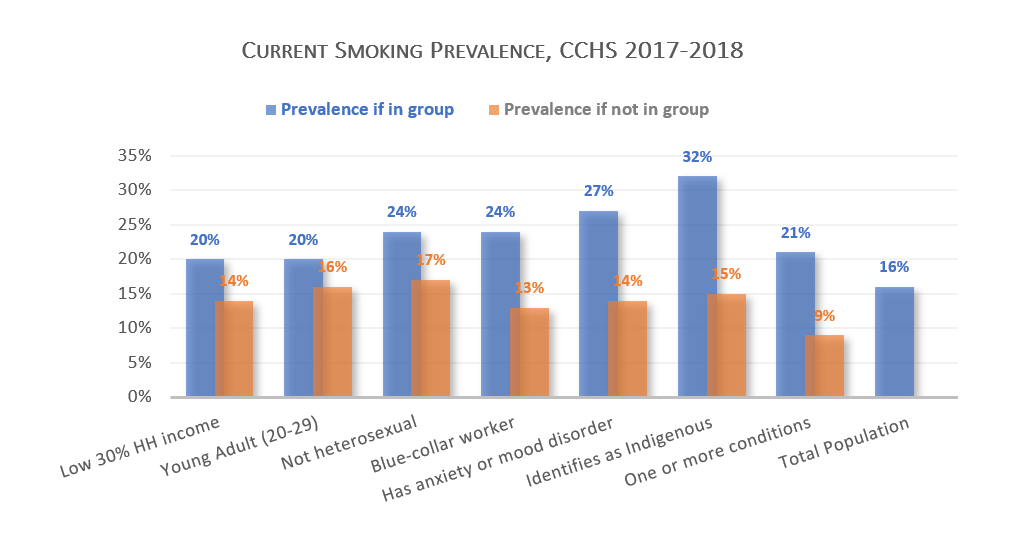 These gaps are especially important to population-health outcomes when the affected population is large. One quarter of Canadian smokers identify as having an anxiety or mood disorder, compared with less than one-tenth for those who identify as Indigenous or not heterosexual. Among the six conditions identified by Health Canada the largest number of smokers are found among blue-collar workers and those living in relative poverty.

Differences in population size mean that interventions targeted at some populations will have a larger or smaller impact on the overall health of Canadians than will others. Among the groups identified by Health Canada since 2018, for example, closing the prevalence gap for those in the poorest 30% of households or for those who work in blue-collar jobs would have the largest impact on overall smoking rates. If the gap were closed for all groups, overall smoking prevalence would fall by 41%. In 2017-18 that would have brought Canadian smoking prevalence down to 9.4%.