Last week, Health Canada made public its plans to ban advertising of vaping products wherever they can be seen or heard by youth. At the same time, they also released two surveys that provide information and insight into young people’s vaping behaviours.

Here are 5 take-away messages from these reports: 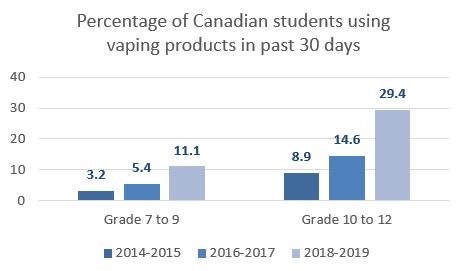 This year’s CSTADS survey was the first major representative Canadian survey of youth vaping since the federal government legalized the commercial sale of recreational nictoine. Prior to that date, vaping products were available in the grey-market of vape stores and on-line retailing.

This increase has been seen across all provinces, but at different levels. The largest central Canadian provinces have lower rates of use than do the eastern or western regions, although the growth in Ontario (a 270% increase in 2 years) was one of the highest. New Brunswick did not participate in this survey in 2014-2017. 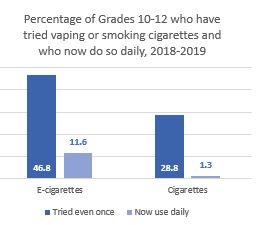 The CSTADS results provided by Health Canada do not present information on dual users (those who both smoke and vape) or the relationship between past use of tobacco and e-cigarettes. 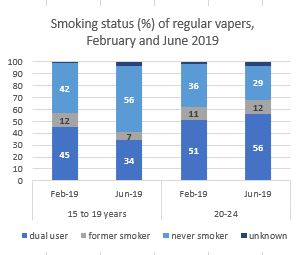 3. For young people, vaping is an on ramp to nicotine use, not an off-ramp for smoking.

Even among the one-third (34%) of teenage vapers who also smoke cigarettes, only a minority (32% of dual smokers or 14% of all vapers aged 15-19) say they are trying to quit smoking. Among young adults (aged 20-24), 25% of regular vapers say the main reason they vape is to quit smoking.

4. Flavours are the “main reason” given by half of young people for vaping 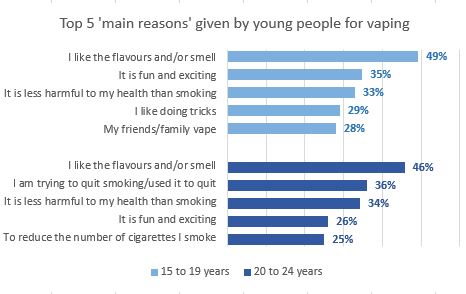 The most frequently-cited “main reason” of teenagers and young adults for vaping is because they “like the flaours and/or smell.” Other key reasons are that “it is fun and exciting” and belief that these products are less harmful than cigarettes.

One-third of teenagers and young adult vapers say the main reason they vape is their belief that this is less harmful than smoking.

One-third of young adults say they now are using or have used e-cigarettes to help quit smoking.

5. Age-gating is not working very well.

In all provinces specialty vape shops have fewer restrictions on displaying products and promotions, and these stores are expected to be age-restricted. Nonetheless, the Environics report suggests that large numbers of underage vapers are given access to these places.

Vape shops are among the most frequently-cited place where under age regular vapers buy their devices (39% of underage vapers) and liquids (31%). One in 7 (14%-15%) of underage vapers reports they usually buy their own products on-line, with a comparable  number reporting purchases in convenence stores (10% for devices, 16% for liquids).

Children’s use of vape shops is also reflected in their recall of seeing promotions in these stores. One in 5 teenage vapers (age 15-19) recalls seeing advertisement sin vape shops (33% of the 63% of this age group who recall ads).

Teenagers vapers are frequently not asked to show proof of age. Only one-quarter of teenage vapers (aged 15-19) are “always” asked to prove their age when buying vaping products, with another quarter “often” asked and another quarter asked “rarely or never”. Teenagers report that when ID is required for on-line purchases, four times in ten (37%), they do not have to prove they are old enough other than by clicking a button.