May 23, 2022 marks four years since Royal Assent was given to the legislation that turned the Tobacco Act into the Tobacco and Vaping Products Act. On that day, the Minister of Health is obliged by law to submit to both the Senate and the House of Commons a report on the “review of the provisions and operation of this Act.”

This is no minor obligation placed on the Minister. It is one of only two statutory obligations for specific actions by the Minister under this act (the other one, regarding public disclosure of information is not in force until the department prepares regulations). There are significant potential consequences for non-compliance: if the Minister fails to conduct a review or fails to submit it to Parliament, h/she is liable to a $25,000 fine (section 3 and section 48).

This was not a voluntary undertaking of the government. Provisions for this ‘legislative review’ were not included in the bill as it was originally submitted to Parliament, but were introduced by (opposition) Senator Judith Seidman during the Committee’s final clause-by-clause discussion on April 13, 2017.

As Senator Seidman explained, a mandatory report from government was a way to protect Canadians in the face of many unknown issues surrounding the legalization of vaping products.

All things considered, everything is so unknown that I really feel it’s important to keep tabs on this as parliamentarians. We’re opening the door to something. We need to be able to feel secure in ourselves that we’re doing the right thing and that we’re able to monitor.”

Legislative reviews are a new tool for accountability and program improvement.

The requirement for a ministerial report to Parliament on significant issues of public concern is not unique to tobacco. The Cannabis Act, which was studied by Parliament around the same time as the TVPA, also had reporting requirements introduced during clause-by-clause study. That review is required to be presented to Parliament in March 2023.

Statutory reporting requirements are an emerging tool for federal government accountability and in recent years have been included in many different policy areas. Among these are requirements to report on progress towards climate change goals (due the end of 2023), on laws aimed at reducing the number of Indigenous children in care ( due after 2025), on the state of palliative care (due 2024), on food safety (after 2024). 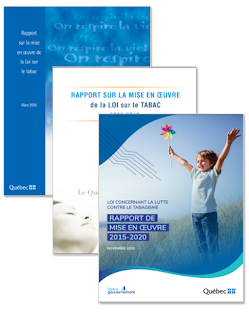 One Canadian province has included a mandatory review of its tobacco laws for over a decade. When Quebec adopted a new Tobacco Act in 1998, it included obligations (which have been continued in section 77) for the Minister to present an implementation report by October 2005 (176 pages), October 2010, and November 2020.

The Quebec reports provide legislators with information on the results, as well as an explanation of areas where reforms are needed.  They have served to accelerate legislative change.

In the conclusion to its most recent report, for example, the Quebec Ministry of Health signals that actions (including legislative change) are needed to address problems that challenge governments across Canada. Among the concerns raised by the ministry are the persistence of disparities in tobacco use, the incentives that manufacturers give to retailers to promote sales, the growing similarities between the vaping and tobacco markets, and others. It recommends that measures be expanded to address price and accessibility, to enhance the power of enforcement officials, more controls on vaping products, and others.

In launching a consultation on its legislative review, Health Canada has tightened the focus of its review.

Last month, Health Canada released a discussion paper and opened a 5-week consultation on the legislative review. The consultation period ends at midnight April 27, 2022 — less than a month before the statutory deadline for the department to present its report to Parliament. 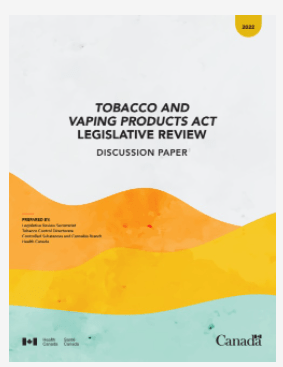 Through the discussion paper the department confirmed that it is intending to provide Parliament with a partial review of the “provisions and operations of the act”, and will focus only on 5 topic areas. For each of these, public views are sought with reference to 1) the sufficiency of current measures, 2) the availability of additional measures and 3) the state of evidence to support additional action. These topics are:

Apparently excluded from this review will be a review or report on “provisions and operation” of legislative measures addressing tobacco use, adult vaping, enforcement, industry reporting, product regulation, etc.
The public consultation triggers yet another skirmish with industry front-groups 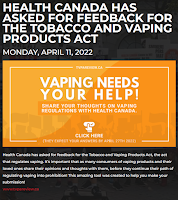 The public consultation is not a required step in the legislative review, although such consultations are required for other policy developments.
This is the fourth federal consultation on youth-related vaping issues in the past 14 months (the others were on taxation, ending June 2021; flavour restrictions, ending September 2021, and nicotine concentration, ending March 2021). Other consultations have taken place since the TVPA was introduced — including a 2019 consultation on Reducing Youth Access and Appeal of Vaping Products, consultations on Vaping Product Labelling in 2019, consultations on the Regulation of Vaping Products in 2017 and targetted consultations on relative risk statements in 2018. At this point it is not obvious that the department will be provided with information that is not already at hand as a result of these previous exercises.
Predictably, Rights4Vapers (the group led by vape store owners and  whose campaign against flavour restrictions was funded by the head of the Vaping Industry Trade Association) is driving submissions to the consultation process. This agency puts great emphasis on the numbers of responses it generates, and uses the results of these mobilization efforts to challenge public health regulations.
The legislative review of the TVPA will set important precedents.

The TVPA is one of the first modern laws for which a legislative review must be tabled in parliament. How the Minister of Health addresses his responsibilities under the Tobacco and Vaping Products Act will set the standard for the same obligations under the Cannabis Act. How Parliament responds if the Minister files a partial or late report (as is signalled in the discussion document) will similarly set the precedent for other legislative reviews.

An opportunity not to be missed.

The new requirement for a legislative review of Canada’s tobacco law has enormous potential to improve the lives of Canadians by accelerating the end of the tobacco epidemic and its new variant, vaping. Providing Parliamentarians and the public with a detailed and honest accounting of the challenges facing government on this important file and a vision for legislative and policy enhancements could be the springboard for the next generation of tobacco laws in Canada.