For millenia the New Year has brought with it an expectation of personal improvement, and for many smokers that means trying (often again!) to quit smoking. This post looks at newly-available data from the Canadian Community Health Survey (CCHS) which sheds some light on the quitting behaviour of Canadian smokers.

(The charts shown below and the data on which they are based can be downloaded here.)

One in seven Canadians who say they recently quit smoking report they did so in January. 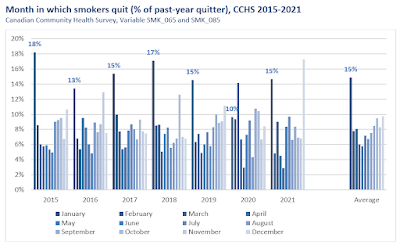 Smokers appear more likely to quit in January than any other month.

When gathering information for the Canadian Community Health Survey, Statistics Canada asks each participant about their smoking status. Those who say they are former smokers are asked how long ago they quit and those who say they have quit in the past year are then asked in which month that quit happened.

The results of these questions over the past 7 cycles of this survey show a clear pattern: the month with the most reported quits is January (15% of quits). The months with the least reported quitting are the spring months of April to June, in which fewer than half as many successful quits are reported as in January.

Because the survey does not include questions about when non-successful quit attempts took place, it is not clear the  extent to which the cyclical pattern of successful quitting relates to differences in quit attempts, differences in success rates or just the timing of the interview. (Statistics Canada normally conducts the Canadian Community Health Survey throughout the year, with roughly even numbers of Canadians interviewed in each month.) Other information that is not provided in the survey is the month in which smokers start (or relapse): we know little about the seasonal patterns of smoking initiation and relapse behaviour.

The number of Canadians who quit smoking each year is equivalent to the population of Halifax. 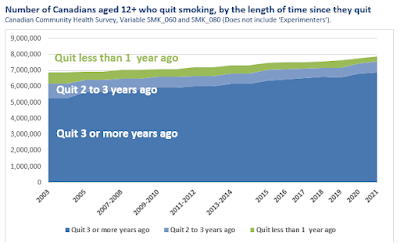 Over the past 6 years, Statistics Canada has estimated that an average of 400,000 Canadians are former smokers who quit over the past 12 months.

But the number of Canadians who remain former smokers each year is only one-sixth as large (equivalent to the population of Prince George).

Quitting rates in Canada appear stable over time, but many fewer Canadian smokers are quitting. 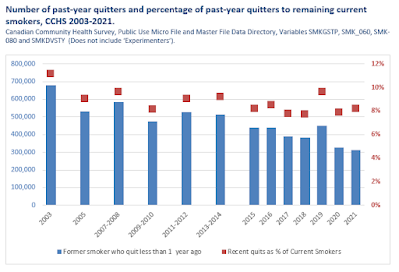 Over the past two decades, the relationship of recent-quitters to remaining smokers has fluctuated from 8% to 11%.

Relative to the population, there are fewer former smokers now than 20 years ago. 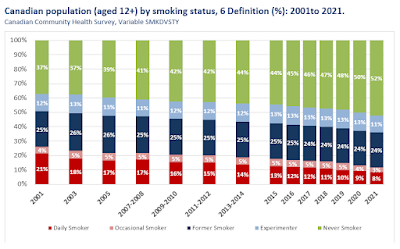 Smoking prevalence is falling mostly because more people are not starting smoking (and not because there are more former smokers).

Statistics Canada estimates that since 2015: 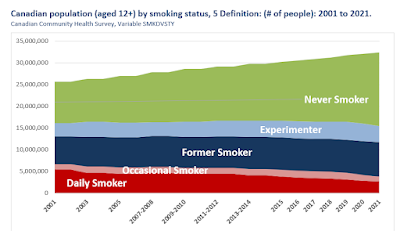 During this period, the number of Canadians aged 12 or over grew by 2 million people. If, in a counterfactual scenario, smoking behaviour had been stable during that period of population growth, there would now be:

The actual population change is shown in the waterfall graph below. 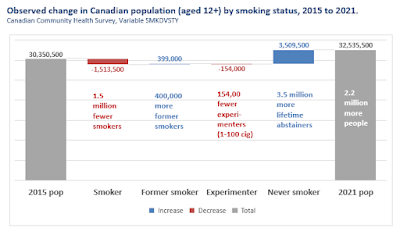 Are these estimates plausible? Where did the 1.2 million ever-smokers go?

The data outlined above suggest that between 2015 and 2021, the Canadian population lost 1.2 million people who had ever smoked a cigarette (From 16.7 million to 15.5 million).

The number of deaths in Canada reported by Statistics Canada for the 7 year period 2015 to 2020 and for 2021 total 2 million. A contribution to the population loss of  1.2 million ever smokers would be the high ever smoking rates among the older Canadians who made up most of those deaths. The CCHS reported that in 2017-2018, three-quarters of Canadians then over 60 years of age had smoked at least one cigarette