Why so anodyne? Canadians need strong, effective and truthful warnings on vaping packages

Yet on the eve of this traditionally slow time, Health Canada handed public health groups with a challenging summer task: published in the Canada Gazette on Saturday June 22 were 27 pages of proposed regulations for vaping products. Responses were due 75 days later, on September 5.

The proposed regulations are no trivial matter. They are the first significant regulatory proposals from government to constrain the way that nicotine products are packaged and labelled, or to control the amount or type of nicotine that can be sold as a recreational drug.

For decades, nicotine other than tobacco was controlled as a medication under the Food and Drugs Act. The tolerance that was given to vape shops was so extensive that many Canadians who bought nicotine liquids for vaping devices were likely unaware that they were participating in an illegal sale.

All this changed when the federal Tobacco and Vaping Products Act was approved by Parliament and proclaimed in May 2018. The legalization of nicotine changed the commercial market, bringing nicotine into the Fast Moving Consumer Goods (FMCG) market. Convenience stores became the route to market for multinational tobacco companies to compete for this new market. (Picture below courtesy of Toronto area South Bayview Bulletin Board).

Health Canada has yet to make public whether or how it will regulate the types of ads that appear in many convenience stores (several provinces have banned them). Their first priority was to develop labelling requirements and child-resistant container requirements. As Health Canada describes them:

The proposed labelling requirements include a list of ingredients, and, depending on the presence of nicotine and its concentration, a health warning that nicotine is highly addictive, the concentration of nicotine, and warnings regarding the toxicity of nicotine when ingested. In addition, the proposed Regulations would set out expressions that may be used on the product or package to indicate when a vaping product is without nicotine. The proposed Regulations would also require refillable vaping products, including devices and their parts, to be child resistant. 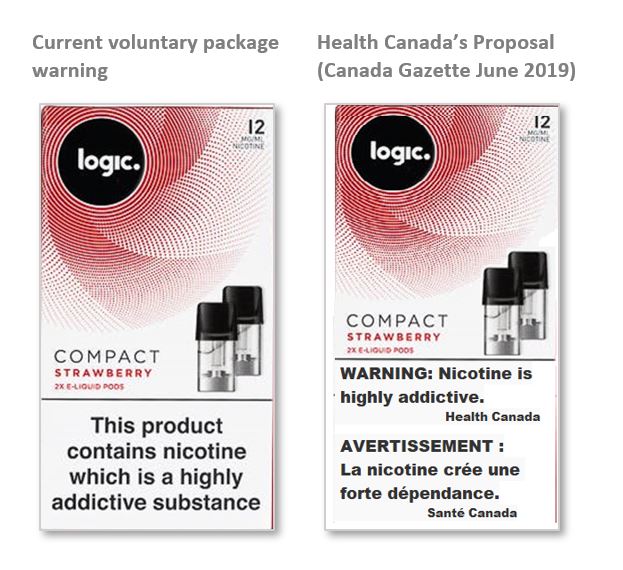 Health Canada’s proposals for package warnings for vaping products are surprisingly unambitious for a country which invented graphic health warnings. The regulations require a only a text warning, only for one health effect and only on one side of the package. They are arguably less powerful than the warnings currently placed on a voluntary basis by the industry.

Canada can do better

This proposed warning seems even more  milquetoast now than it did when it was first Gazetted in June. South of the border, health authorities have spent the summer snarling at nicotine companies and expressing concerns about potential acute risks for young people who vape:

Admittedly, only one other country currently requires graphic health warning messages on vaping product packages (South Korea). Admittedly, it is important to design them thoughtfully — and that takes more than the 75 days given to respond to the proposed regulations. Admittedly, Health Canada should not leave the packages of these risky products unregulated for any longer than necessary. 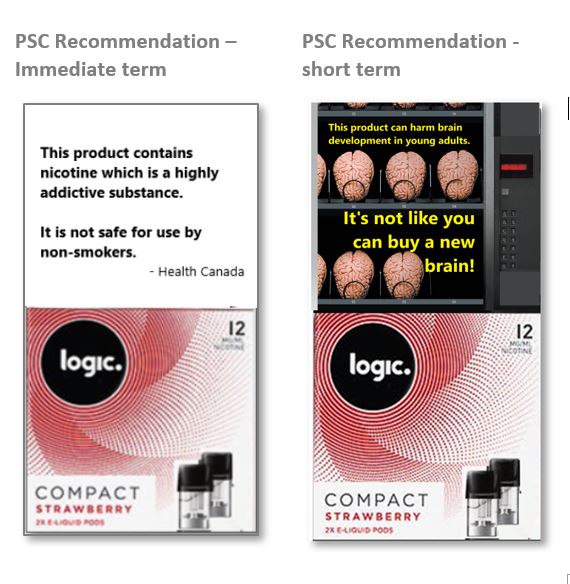 For that reason, we are proposing that in the short run, Health Canada require a strengthened and more prominent version of its warning be on all packages as soon as possible. Within the next year, however, it should be possible to refine and adapt a series of rotating messages which provide Canadians with the information about the range of health risks associated with vaping to which they are entitled. One of our suggestions on how to do this is shown below.

How much is too much? How fast is too fast?

The proposed regulation also sets limits on how much nicotine is permitted in the liquids or cartridges used with vaping devices. The level — at 66 mg / mL — is much higher than any of the major products currently on the market. This is in stark contrast to the European Union, Israel, Korea, and Iceland where the maximum level allowed is 20 mg/mL.

Nor does the regulation address the additional risks of nicotine salts — which are shown even by the industry research to reach the brain more quickly than those which do not use this ‘protonated’ technology. It does little to respond to increasing concerns about the collateral damage of the nicotine arms race that is happening between JUUL and its imitators.

A time for sober second thought

More often than not, the final version of regulations varies little from the version that is initially published. Concerns about departmental regulation making once resulted in Parliament being given an opportunity to vet Tobacco regulations before they came into effect. This provision was removed when the law was updated  to include vaping products last year.

So the only recourse left is for a change of opinion by the department and the central agencies (Treasury Board, Privy Council Office, Cabinet) to which it reports. Cross your fingers!

Physicians for a Smoke-Free Canada’s full response to the proposed regulation can be downloaded here. Our key recommendations are:

1. Vaping packages should carry warnings of the following risks:

2. Manufacturers should be required to place warnings on at least 50% of the top of two principal display surfaces, with one side each for English and French.

3. Graphic health warnings for vaping product packages should be developed.

4. Plain packaging of vaping products should be required.

5. The maximum allowable nicotine concentration should be set at 20 mg/mL.

6. The impact of the introduction of nicotine salts on youth vaping should be reviewed.