Over the past months Canadians have heard the views on vaping regulations of Concordia University economist Ian Irvine. 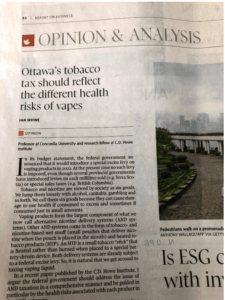 Recently the Globe and Mail’s business editor gave space to his opinion that taxes on vaping products should not be so high as to discourage people from using them and that governments should do more to encourage smokers who don’t quit to switch to the companies’ new forms of nicotine products. [1]

Two weeks earlier, the CD Howe Institute had published his longer report on the same theme. [2]

This was not the first or the only time that the CD Howe Institute had promoted Mr. Irvine’s views on vaping products. At the end of March, they hosted his letter to the federal health minister, encouraging her not to see youth vaping as a crisis, but rather as a driver of lower youth cigarette smoking. [3]

Last fall, Mr. Irvine was the author of a series of CD Howe posts on vaping policies, providing several reasons why alternative nicotine products should be lightly regulated, attributing a decline in cigarette use to the marketing of vaping products, and recommending against new controls on nicotine levels or flavours. [4] [5] [6] Earlier in the year, he had presented the same views in a CD Howe Institute podcast, [7] and was one of several vaping-friendly presenters at the November 2019 CD Howe policy conference “Vaping and E-cigarette Regulation in Canada”. [8]

At no time did the CD Howe Institute acknowledge that Mr. Irvine was working on a contract funded by the Foundation for a Smoke-Free World (FSFW), the most recent in a history of tobacco industry efforts to align public and regulatory opinion with their business interests.

Mr. Irvine and the Foundation for a Smoke-Free World.

In July 2019, the Foundation for a Smoke-Free World provided a two-year grant to the private research firm, BOTEC for an undisclosed amount. The task assigned with the grant was to “Investigate the Drivers for Smoking Cessation in Five Countries with ANDS Markets”, and the key deliverables were to be “Case studies and consolidated research report submitted to FSFW”. [9]

Mr. Irvine was engaged to prepare the report on Canada, which was integrated into Botec’s 5-country study. [10] Botec’s report and the 5 individual country studies were published last month on the SSRN portals, including Mr. Irvine’s “A Multi-Disciplinary Study of the Drivers of Smoking Cessation in Canada.” [11]

In his report, Mr. Irvine concludes that the only measures that have historically reduced smoking rates in Canada are higher prices and smoke-free policies, and that other regulations (health warning labels, plain packaging, etc) have done little other than contribute indirectly to a long term trend. By contrast, opening the market for alternative nicotine products was a “major disruption” to the cigarette market, responsible for cigarette sales declining “precipitously” after 2018. In addition to low taxes, he suggests the federal government encourage smokers to switch to new tobacco products and criticizes the federal tobacco strategy as beng “directed to tobacco use reduction rather than damage reduction”.

The posting of the reports by Botec and Mr. Irvine on the SSRN network in April 2021 was the first public acknowledgement that Mr. Irvine was a third-hand recipient of tobacco industry money: “This work was funded by a grant from the Foundation for a Smoke Free World, which had no control over the work process or the report.

The CD Howe Institute and Conflict of Interest 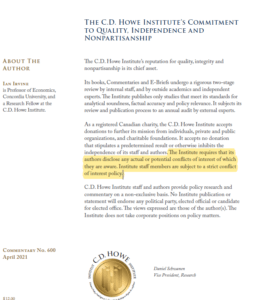 In the preface to its policy papers, the CD Howe Institute includes a message from its vice president of research. “The Institute requires that its authors disclose any actual or potential conflicts of interest of which they are aware.” This text also appeared on Ian Irvine’s commentary on vaping taxes.

From this we can perhaps conclude that the receipt of money from a tobacco-industry funded granting organization was not considered a conflict of interest by the CD Howe Institute management, or not one worth sharing with its policy audience.

With a former tobacco industry CEO as vice-chair of its board of directors, the CD Howe Institute may not consider that tobacco industry interests are in conflict with its own institutional values. (Mr. Brian Levitt headed IMASCO/Imperial Tobacco until it was fully absorbed by British American Tobacco in 2000).

Undisclosed funding by commercial interests is a public health problem.

Mr. Irvine is one in a long line of Canadian researchers who have engaged in public discussions on tobacco use and other health-harming products while not disclosing that they have been funded by the industry whose position they are supporting. It was decades after the famed psychiatrist Hans Selye discouraged parliamentarians from curbing tobacco marketing because cigarettes helped prevent stress-related disease, for example, that his relationship with the industry came to light. McGill epidemiologist Corbett McDonald failed to disclose that his research into the health effects of asbestos mining was funded by the industry that benefitted from his conclusions that low levels of exposure were safe. In the late 1980s, Philip Morris secretly funded a symposium at McGill University and subsequent publications to allay concerns that smoke-filled offices were a source of illness. Theodore and Elia Sterling at Simon Fraser University were funded to oppose bans on workplace smoking.

The Foundation for a Smoke-Free world is the modern evolution of an historic industry practice to use friendly scientists to run interference against regulatory controls. The big funding bodies in the USA were Tobacco Industry Research Council/Council for Tobacco Research and the Center for Indoor Air Research, famously discredited as a result of U.S. lawsuits. The same tactics were used in Canada, with the companies working together to support researchers looking at the benefits of smoking, alternative causes of cancer and heart disease, and to deflect concerns about second hand smoke.

The Framework Convention on Tobacco Control

In ratifying the global tobacco treaty and adopting the guidelines on its implementation, the government of Canada has officically adopted the position that the interests of the tobacco industry “are in direct conflict with the goals of public health” and has accepted responsibility to “protect these policies from commercial and other vested interests of the tobacco industry”.

Health Canada has not yet provided guidance to other levels of government, to the media or other policy stakeholders on how that inherent conflict should be managed in an open and liberal democracy.

In 2016, with the encouragement of a wide range of health agencies, the department reported to the World Health Organization treaty secretariat that it had “put in place measures to undertake a review of existing domestic actions, global approaches and opportunities to reinforce and build on current domestic measures.” and that details of these actions would be reported in subsequent years. Nothing has yet been reported, although guidance based on international experience is available.

Until these guidelines are in place — and until publishers like the Globe and Mail and policy-influencers like the CD Howe Institute provide transparency to their readers — Canadians should continue to be very cautious in receiving the views of those, like Mr. Irvine, whose recommendations are aligned with those of the industry that finances their work.

[1] Irvine, I. Ottawa’s tobacco tax should reflect the different health risks of vapes. Globe and Mail. May 9, 2021.https://www.theglobeandmail.com/business/commentary/article-ottawas-tobacco-tax-should-reflect-the-different-health-risks-of-vapes/

[10] Sam Hampsher and James Prieger. Investigating the Drivers of Smoking Cessation: A Role of Alternative Nicotine Delivery Systems? BOTEC Analysis for the Foundation for a Smoke Free World, October 2020.
https://papers.ssrn.com/sol3/papers.cfm?abstract_id=3773201

[11] Ian Irvine and  Sam Hamsher, S. A Multi-Disciplinary Study of the Drivers of Smoking Cessation in Canada. 2020. https://papers.ssrn.com/sol3/papers.cfm?abstract_id=3774423